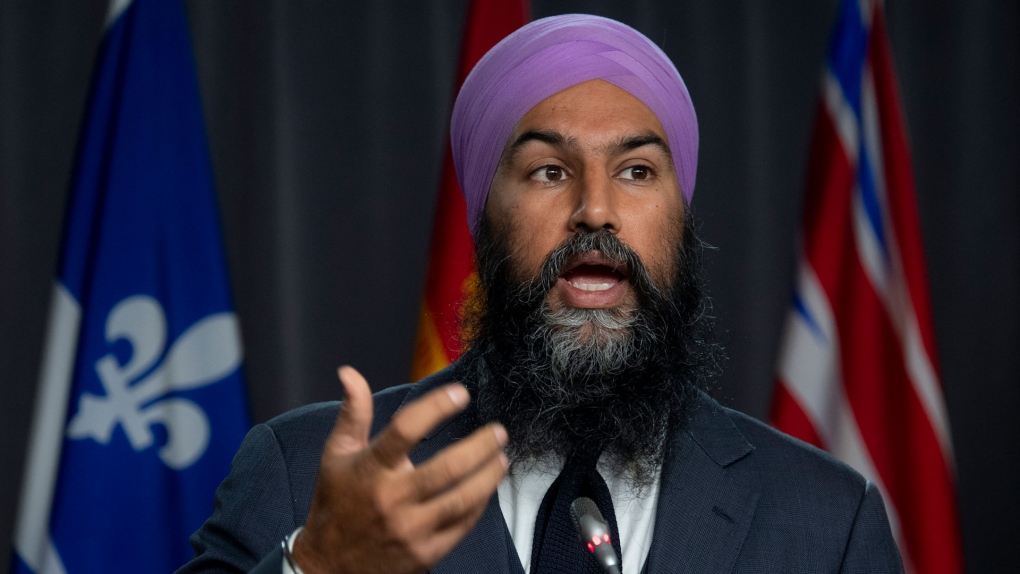 Speaking on Newstalk 580 CFRA's "The Goods with Dahlia Kurtz", Singh said the Liberal government, in its effort to keep benefits such as the Canada Emergency Response Benefit (CERB) from being accessed by people who don't need the help, designed a program that excludes the most vulnerable.

"One of the things we found during this pandemic is we're up against a massive inertia of a Liberal government that is trying to design programs to exclude people," Singh said. "They're willing to miss out people who desperately need help so that they can avoid helping those who don't need it. They want to make sure that someone who doesn't need the help doesn't get it but they're willing to miss the people who are most desperate. That's what we're up against."

The CERB ended on Oct. 3, and was replaced with the Canada Recovery Benefit (CRB), which still requires at least $5,000 in 2019, 2020 of employment income or EI benefits in order to qualify. One of the main criticisms many disabled Canadians have made about the CERB and the CRB is the requirement to have previously received employment income. Those who cannot work due to their disability or who cannot find gainful employment say governments, both federal and provincial, have ignored them, a concern echoed by Singh.

"From the beginning of this pandemic, we said this should be available to anyone who needs it. That includes people living with disabilities," he said. "As we went through the pandemic and drew attention to the amount of money we wanted to continue to fight for to get people the help they needed, we pointed out that people living with disabilities were ignored from the beginning."

The Liberals promised to create a new Canadian Disability Benefit, modelled after the Guaranteed Income Supplement for seniors, in September's Speech from the Throne. Details of this plan have yet to be announced.

A one-time $600 payment to anyone with a valid Disability Tax Credit certificate (DTC) will be delivered starting Oct. 30. Singh called this benefit inadequate.

About 1.7 million Canadians are expected to qualify for the $600 payment, but there are millions more who will not.

Singh acknowledged that his party holds the balance of power in the hung parliament. The minority Liberals have relied on the NDP's support to survive confidence motions in the House of Commons, including the vote on the Speech from the Throne. That leverage has allowed the party to work some demands into legislation in exchange for support, but Singh says he's still not the one who controls the levers of power.

"We're in a position where we have some leverage … we were able to get wins but we're not in government, we are not calling the shots," he said. "I'm still not the prime minister and it's still the Liberal government that's in control."

Singh says the Liberals have "failed to deliver help for people living with disabilities."

On Saturday, Kurtz asked Singh to condemn comments made by Ontario Premier Doug Ford and Alberta Premier Jason Kenney that sparked outrage among Canadians with disabilities, who called the comments ableist.

Ford was asked on Aug. 6 why a $100 pandemic relief top up for ODSP recipients was coming to an end. Ford said his goal was to support all people in Ontario, but claimed that people on the disability program were making more money than they were pre-pandemic.

"[T]here's a certain group that are collecting ODSP that have part-time jobs, and if they keep the CERB going and their part-time job, they're actually up a few hundred dollars — not down. But I understand people are struggling, I get it," he said.

Ford then said the "best way" to help people on ODSP and Ontario Works (OW) is to find them a job.

"[T]he best way to help people in Ontario Works or ODSP, if they're healthy and they're able to work, get them a job, help get them a job," the premier said.

On Sept. 15, Kenney said the number of people qualifying for Alberta's Assured Income for the Severely Handicapped program (AISH) was "growing far faster than the overall population" and that it was "initially designed for the severely handicapped."

"What are the criteria? How do we define severely handicapped in this day and age? Those are the kinds of issues that they're looking at," Kenney said. He also stressed that anyone who qualifies for AISH would not be losing benefits.

Singh said he "absolutely" condemns the comments made by the premiers.

"They lack compassion and understanding for what people are going through," he said.

Singh promised to continue to raise the issue of support for Canadians with disabilities in the House of Commons.