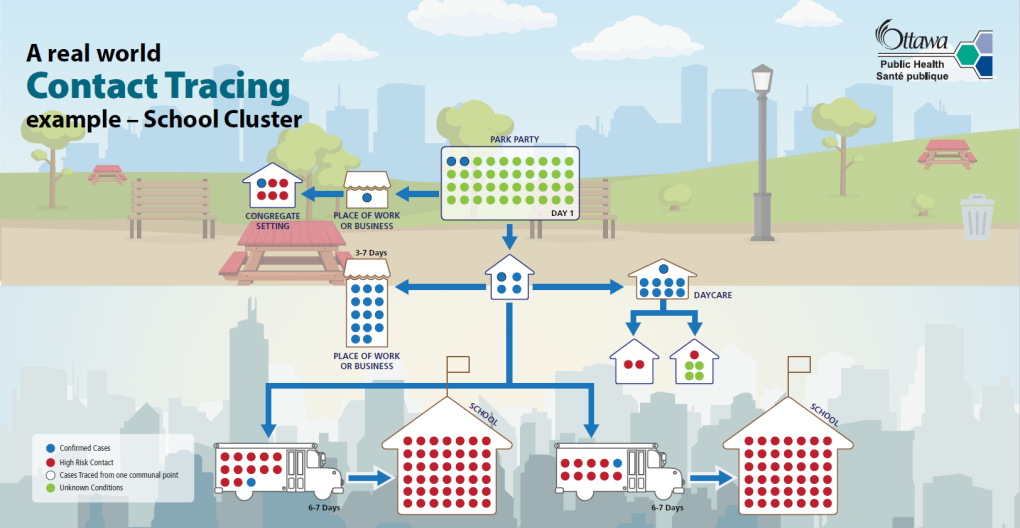 OTTAWA -- It doesn’t take much for COVID-19 to spread, and it can start with an outdoor gathering.

That’s the message from Ottawa Public Health this week, sharing a real-world example of what community transmission of COVID-19 looks like.

The example started with an outdoor barbecue in a park. It ended with more than 100 people having to self-isolate for two weeks and get tested for the virus.

“You can see how a group of 40, a couple of people ill, quickly can lead to 105 people having to stay home and multiple more people testing positive,” medical officer of health Dr. Vera Etches told the city’s board of health Monday night.”

“It really had a significant impact in terms of two workplace outbreaks,” Etches said.

One of those outbreaks was in a child care setting, where there was transmission among staff. Then two other children became symptomatic and went to two different schools on two different buses.

“There were 105 high-risk contacts who then needed to self-isolate for 14 days and go and get tested,” Etches said.

Earlier this month, Etches shared an example at city council of 10 people who attended a cottage party. One person with symptoms quickly became 40 people who tested positive for COVID-19 within nine days.

The province has since instituted limits on private gatherings of 10 people indoors and 25 people outdoors.

Under these rules, the 40-person park BBQ would no longer be allowed, but the cottage party would be.

What community transmission looks like: a 40-person BBQ in a park led to 105 high-risk contacts in schools who had to self-isolate for 14 days & be tested. Parents had to miss work, kids had to miss school & 105 more people in line for testing. All from a BBQ. Our actions matter pic.twitter.com/xMq5hOWckk