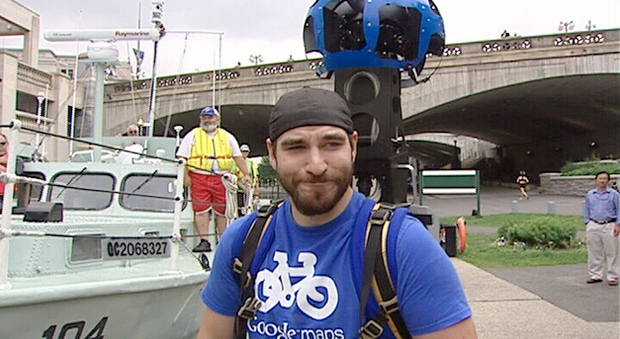 The popular feature displays photographs of streets around the world. The pictures are taken with 360-degree cameras mounted on the tops of cars.

But now there's the Google Trekker - a backpack-mounted camera system that can leave the street and go where no car has gone before.

The unusual-looking device made it's Ottawa debut on the Rideau Canal. The operator walked up and down the paths, and even across the locks while surprised locals and tourists looked on.

Google is rather secretive about the technology behind the Trekker. The operator, identified only as Steve, could only tell us that it's made up of 15 individual cameras in a 360-degree array. It takes pictures every 4 or 5 steps. He says it weighs around 40 pounds.

The visit is part of a partnership between Google and Parks Canada to photograph every pathway, hiking trail, nook and cranny of Canada's national parks and historic sites. "We want to show Canadians what belongs to them, and what kind of experiences they can have across the country when they think about travel planning," says Parks Canada's Ellen Bertrand.

The project marks the first use of Google Trekker in Canada.