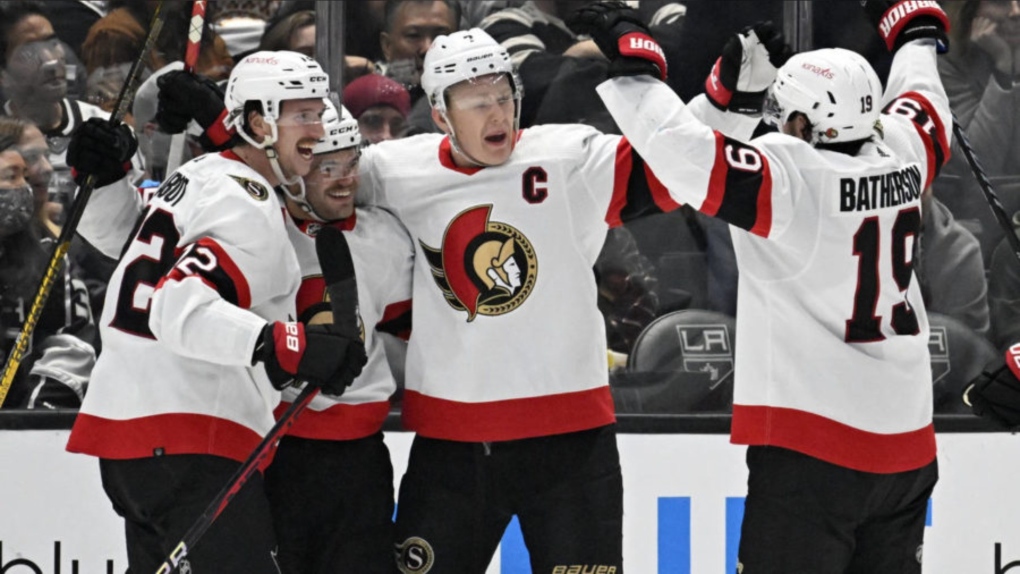 Claude Giroux scored on a breakaway 20 seconds into overtime, Brady Tkachuk had a goal and an assist and the Ottawa Senators beat the Los Angeles Kings 3-2 on Sunday night.

Alex DeBrincat had a power-play goal, Cam Talbot made 25 saves and the Senators won consecutive games for the first time since a four-game winning streak in late October.

Arthur Kaliyev scored two power-play goals for the Kings, winners of just one of their past five games. Jonathan Quick allowed three goals on 39 shots, and Phillip Danault had two assists.

Giroux waited out Quick for his ninth goal on the breakaway set up by Tim Stutzle's stretch pass. Stutzle's had two assists, while Giroux had an assist for his fifth multipoint game of the season.

The power play became a factor in the second period, with Kaliyev striking twice with the man advantage to tie it. His first came midway through the period, but DeBrincat had his own power-play goal less than two minutes later to give the Senators a 2-1 lead.

Kaliyev then unleashed a blistering wrist shot from the right circle to tie it with 2:25 left in the middle period. It was his first career game with multiple power-play goals, and his six tallies on special teams leads Los Angeles.

Good morning #Sens fans! How about a goggle giveaway to start your day!#GoSensGo pic.twitter.com/HrWT8YeRAM

Tkachuk's 99th career goal was the only scoring of the first period. He jammed the puck in at the near post after Thomas Chabot's shot deflected wide and caromed off the boards to put Ottawa up 1-0 at 4:55.

It was Tkachuk's second straight game with a goal.

Chabot picked up his second assist in two games in his return from a concussion. He missed five games because of the injury sustained Nov. 12 against Philadelphia.

Kings F Gabe Vilardi, the team's leading scorer with 11 goals, did not play because of an upper-body injury. He is day to day.

Wine lovers have growing options on the shelf to enjoy their favourite beverage as producers in B.C. offer smaller container sizes.