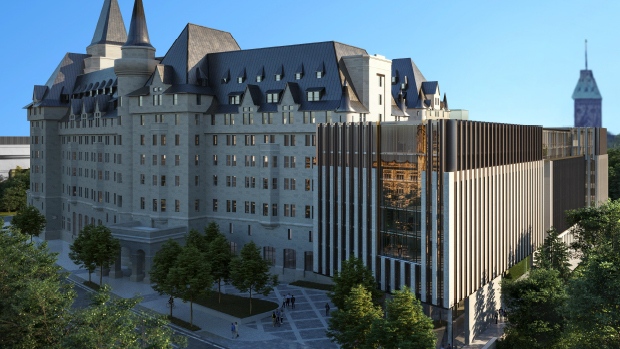 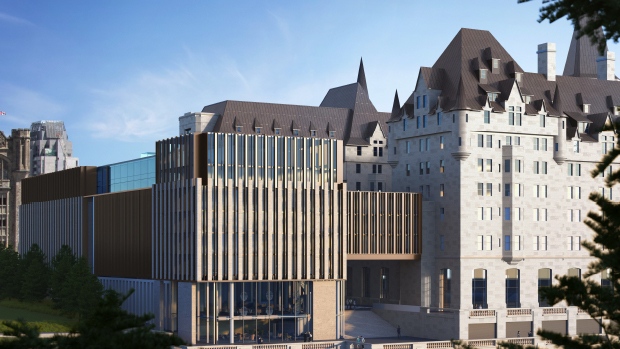 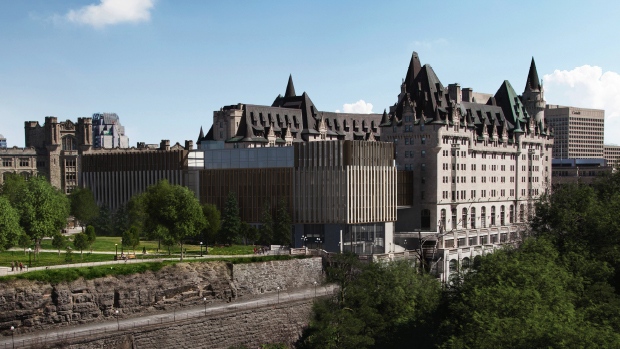 Fifth time lucky?  That's certainly what the owner of the Chateau Laurier, Larco Investments, is hoping with its architect's latest and, it hopes, final re-design.

But the councillor for the area is already saying he won't give it a green light.

The photos above show what the 7-storey addition would look like, clad in limestone, glass and bronze with the intention of creating cohesion with the existing iconic hotel.

Cohesion isn't the word councillor Mathieu Fleury would use.  He's struck by the vertical design of this addition and says, while it's an improvement over the last few designs, it still isn't right.

Spring is a time of growth, something the Chateau Laurier has been trying to do now for nearly 3 years.  But it's that growth that has many folks nervous.

“It scares me because it’s so beautiful,” says one woman walking by the Fairmont Chateau Laurier, “I’m afraid they won’t keep to the style.”

That has been an issue for both residents and city councillors.  The Chateau's first design of its addition in December of 2016 got a resounding "thumbs down."  At 11 to 12 storeys and 218 rooms, it was deemed too big, too boxy and just too much.

So, Larco Investments sent its architects back to the drawing board now for the fifth time, coming up with seven-storey, 147 room addition that councillor Mathieu Fleury says as a stand-alone building, would be a landmark in our city.

Fleury says the architect has made some amazing improvements, with a lower roof line and the use of bronze, limestone and glass but next to the Chateau Laurier, in the iconic Parliamentary Precinct, he doesn’t believe it works.

“I don't know that as an addition, it stands as what we would desire as a capital city,”
he says, “so I'm asking my colleagues to reject the proposal altogether.”

The architects were given three conditions when council voted last year to approve the work on the Chateau:

That has remained a big concern for many Ottawa residents, like Ken Robichaud.

“even though it's modern, to me it doesn't match with what we have at the Chateau Laurier already,” Robichaud says.

This time, though, architects are convinced they have achieved that with limestone piers and glass cladding.

The use of bronze detailing "strengthens the addition's relationship and compatability with the Chateau Laurier," Michael McClelland with E.R.A. Architects Inc. wrote to the Coordinator of Heritage Services for the City of Ottawa.

“The first design was a box,” says David Flemming, the Co-Chair of Heritage Ottawa Advocacy Committee, “and this is a box with pointy bits and some modifications.”

Residents don't care how many re-do's there are, as long as, in the end, they get it right.

“This somehow isn't,” says Don Henning, an Ottawa resident, “and it's going to be around for a long time.”

The design goes to the city’s Built-Heritage sub-committee on June 3rd.  The Planning Committee votes on this new version June 13th.  Even though Fleury will be lobbying against it, he's pretty sure it will pass.