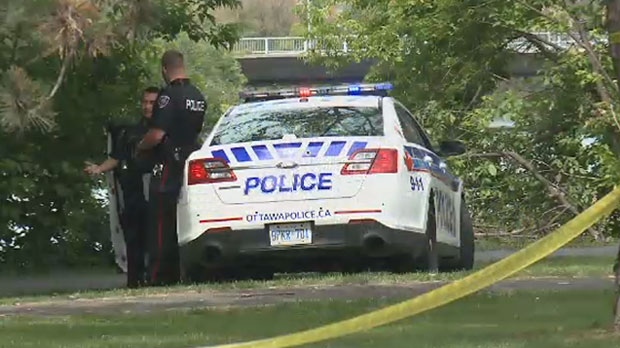 Ottawa Police attend the scene where the body of an unidentified man has been recovered from the Rideau River on Saturday, June 27, 2015.

Ottawa police say the body of an unidentified man has been recovered from the Rideau River.

Insp. John Medeiros says the remains were recovered by police divers after a passerby spotted the body floating in the river at about 8:55 a.m. on Saturday (just north of the Cummings Bridge).

Medeiros says police have contacted the Special Investigations Unit, which was leading the investigation into the case of a man who went into the river on Wednesday, allegedly to evade officers.

Police in London, Ont., said Thursday they were investigating a possible link between the June 14 killing of and 18-year-old man over a cellphone in London and an alleged attack on police in Ottawa on Wednesday.

London police said there was a "possibility" Muhab Sultanaly Sultan, 23, of Calgary, who is wanted for second-degree murder in Jeremy Cook's death, was the man being sought in Ottawa.

Ottawa police called in the SIU after being unable to find a man who jumped into the Rideau River after investigators said he tried to run over two officers on bicycles.