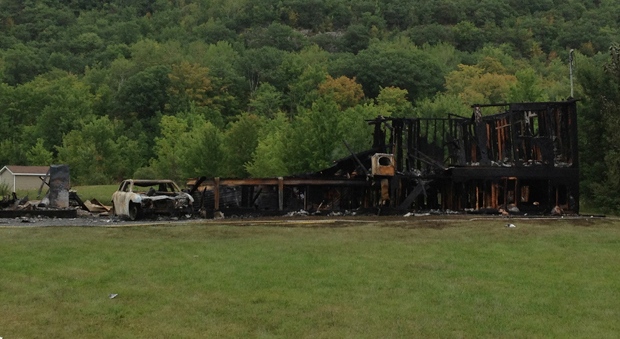 The Lalonde home was completely destroyed in an early morning fire in Luskville, QC.

It only took a daughter’s scream and a few second to make the difference between life and death.

“She's the one who woke us up. If it wasn't for her we probably wouldn't be here,” says Mike Lalonde says of his 8-year-old daughter Alexia.

Still wearing his hospital bracelet, Lalonde returned to his Luskville, QC, home to see the damage.

The fire broke out at about 2 a.m. on Chemin Du Ravin. A few moments later the entire house was engulfed in flames.

“It was fully involved. When the guys left the station they could see the ball of fire,” says Pontiac Fire Chief Michel Lemieux.

Firefighters weren’t able to save the home that was recently put up for sale. The estimated damage is $291-thousand.

Lalonde suffered minor smoke inhalation and was released from Gatineau Hospital later in the day. His son Anthony, 10, and Alexia escaped unharmed and were taken to their mother’s home.

Neighbours say the flames were so high they were worried the fire would spread to the other homes.

Escaping with only the clothing on their backs, Lalonde says he will reunite with his children and live with his parents in Gatineau.

‘The one thing is the family is alright,” he says.