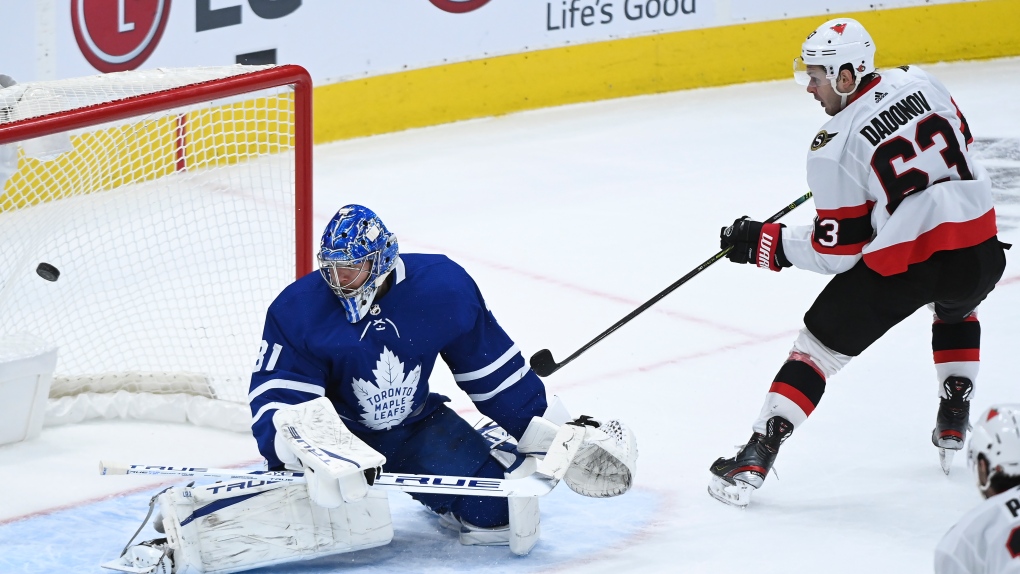 TORONTO -- Evgenii Dadonov scored his second goal of the game 2:19 into overtime as the Ottawa Senators roared back from a 5-1 deficit late in the second period to stun the Toronto Maple Leafs 6-5 on Monday night.

Connor Brown and Nick Paul, with a goal and an assist each, Drake Batherson and Artem Zub, with his first in the NHL, also scored for gutsy Ottawa (4-12-1). Marcus Hogberg stopped 33 shots for the Senators, who face the Leafs again Wednesday and Thursday at Scotiabank Arena.

Auston Matthews scored twice and added an assist, while Joe Thornton, with a goal and an assist in his return from injury, Travis Boyd and Pierre Engvall provided the rest of the offence for Toronto (11-3-2). Frederik Andersen made 25 saves.

Ottawa roared back to force extra time with four straight goals, including Dadonov's batted effort out of mid-air for his fifth of the season with 2:01 left in regulation and Hogberg on the bench for an extra attacker.

Dadonov buried his second on a breakaway in the extra period after blocking a Morgan Rielly shot in the crease with Hogberg completely out of position.

Thornton was back on Toronto's top line with Matthews and Mitch Marner after the 41-year-old missed 10 games with a fractured rib suffered Jan. 20.

Following a 2-1 home loss to the Montreal Canadiens that saw both their four-game winning streak and nine-game point streak (8-0-1) snapped Saturday, the Leafs were shot out of a cannon early in the first.

Matthews scored his NHL-leading 12th goal in 14 games this season when he took a feed from Thornton off the rush and beat Hogberg at 6:32.

Andersen made a nice stop at the other end on Thomas Chabot as the Senators started to show life, but Toronto broke the other way, with Boyd pulling the puck around a sliding Nikita Zaitsev and firing home his second at 10:29.

The rebuilding and last-place Senators, who picked up just their second win since defeating Toronto on Jan. 15 in the club's season opener in Winnipeg on Saturday against the Jets, cut the deficit in half 2:11 later.

Tim Stützle – the No. 3 pick in the 2020 NHL draft – knocked down Zach Bogosian's clearing attempt before finding Batherson with a nice pass for him to sneak his second shortside on Andersen and make it 2-1 as the Leafs held a 13-3 edge in shots through 20 minutes.

Toronto kept coming in the second, with Engvall scoring his first off a stretch pass from T.J. Brodie and another slick feed from Alexander Kerfoot on an odd-man rush at 1:49.

Brady Tkachuk then got mixed up with Andersen and Leafs defenceman Jake Muzzin. Tkachuk and Muzzin, who flipped a puck at the Ottawa winger's older brother Matthew following a Toronto victory in Calgary against the Flames last month, dropped the gloves in a short, but spirited fight.

Thornton scored his second of the campaign at 9:51 off a pass from Matthews to make it 4-1 after Senators blue-liner Mike Reilly needlessly gave the puck away.

Matthews added his second of the night and 13th overall with just under a minute left in the period on a 5-on-3 power play, but the visitors got that one back shorthanded with nine seconds left when Paul followed up Austin Watson's initial shot after a careless turnover by Leafs captain John Tavares for his third.

Toronto's Zach Hyman was then assessed a double minor for high-sticking on Chabot, but the Leafs had the best chance when Hogberg stopped Ilya Mikheyev.

The Senators would eventually get within one, however, moments after the penalty expired when Brown, a former Leaf, scored his third at 5:52.

Hogberg made a nice stop on Hyman with under seven minutes to go to keep it at 5-4, eventually leading to Dadonov's equalizer.

Notes: The Leafs announced before the game they had acquired winger Alex Galchenyuk from the Carolina Hurricanes for forward Egor Korshkov and defenceman David Warsofsky. Carolina dealt winger Ryan Dzingel to the Senators for Galchenyuk and centre Cedric Paquette on Saturday.

This report by The Canadian Press was first published Feb. 15, 2021.