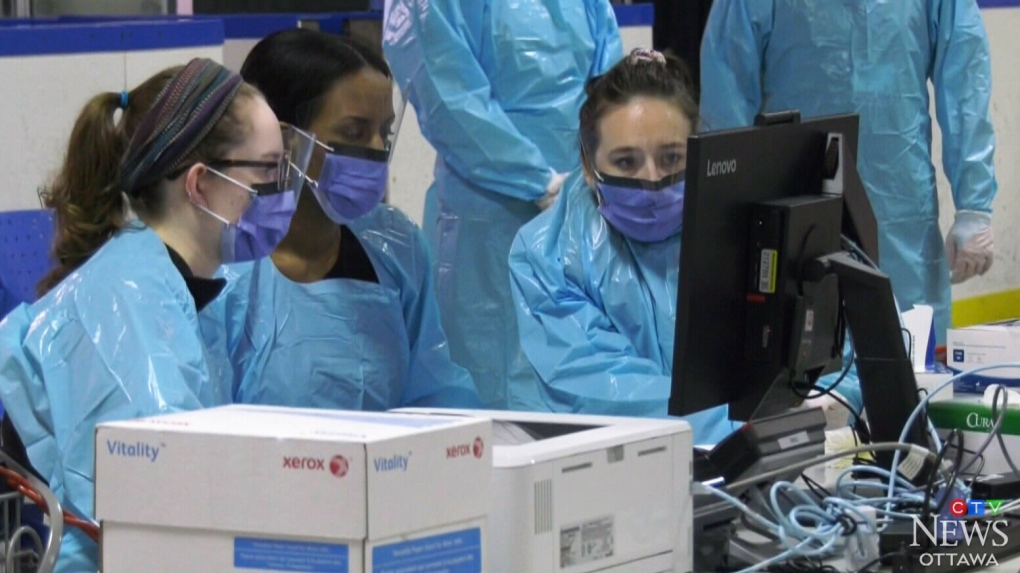 OTTAWA -- Data suggest the COVID-19 pandemic curve has flattened in Ottawa and the gradual reopening of businesses has not yet had an impact.

Ottawa's COVID-19 case count rose steadily in June, but at a much slower pace than previous months. By the latter half of the month, as the economic reopening began to take hold, daily reports of new cases were in the low single digits.

Here is a look at how the pandemic has progressed in Ottawa, 16 weeks since it began.

The first case of COVID-19 in Ottawa was confirmed on March 11. The total case count rose slowly during the latter half of March, but quickly ramped up in April. 1,178 new cases of COVID-19 were confirmed in Ottawa during the month of April and 73 people died.

Each day, the number of active cases rose, as new, laboratory-confirmed cases outpaced the number of recoveries. By the end of April, there were 673 known active cases of COVID-19 in Ottawa, according to data from Ottawa Public Health.

Since the end of April, the rise in the total number of cases has slowed and more people began to recover.

May saw the curve's direction change, but it was also a tragic month for many families in the city.

Curve flattens in May at great cost

Between May 1 and May 31, Ottawa saw an increase in new cases of roughly half the rate seen in April, with 590 new confirmed infections. During that same month, the number of resolved cases jumped dramatically. At the start of May, 805 COVID-19 cases in Ottawa were considered resolved; by May 31, that number doubled to 1,610.

May, however, was also the deadliest month for the disease in Ottawa since the pandemic began, with 168 deaths, many of them in the city’s long-term care homes.

Many of the deadliest outbreaks in long-term care homes began in April, but lasted through the month of May.

If April was the pandemic's spike, then May was the hammer that would flatten the curve in June.

According to data from Ottawa Public Health, June has been a plank month. The number of COVID-19 cases and deaths has still been increasing, but at only a fraction of the pace seen in April and May.

Active cases continued to fall to a low of 40, though data from June 30 showed a slight increase in the number of active cases, from 40 to 46.

Recoveries continued to increase, but the rate of recovery was also much slower. OPH reported 175 new resolved cases in June, as opposed to 805 in May.

By the end of June, only two outbreaks remained active.

The data suggest fewer people are contracting the virus, accounting for the slower rate of not only new cases, but recoveries as well. The testing figures provided by Ottawa Public Health show that testing remains strong and fewer positive cases are being returned.

At the start of June, as many as three per cent of all tests came back positive. By the end of the month, that number had dropped to 0.3 per cent.

Laboratories returned more than 19,000 test results between June 1 and June 28, for an average of 680 tests per day. 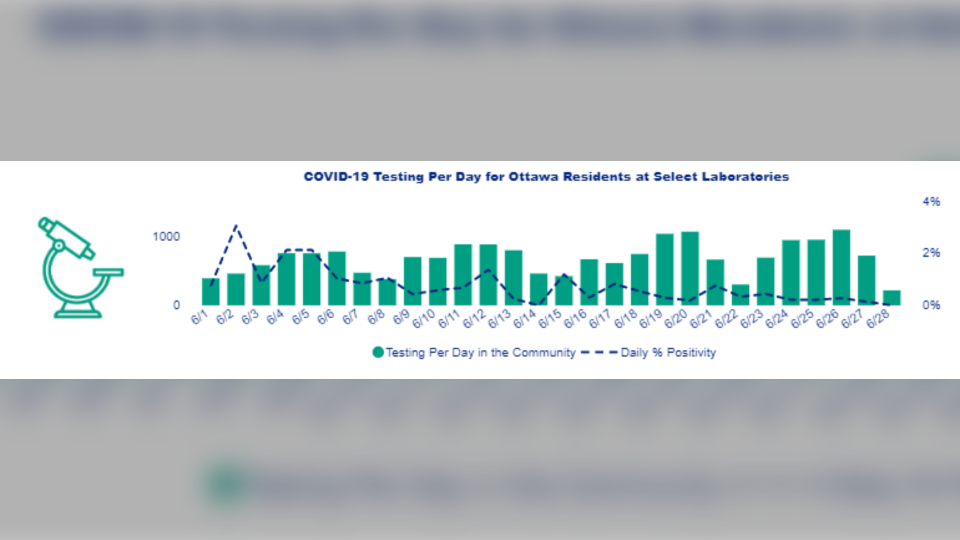 However, OPH notes that those who did contract the virus in June were still getting it from the community, and not from a close contact or institutional outbreak.

According to the data, two-fifths of all new confirmed COVID-19 cases in Ottawa in June are believed to be the result of community spread. 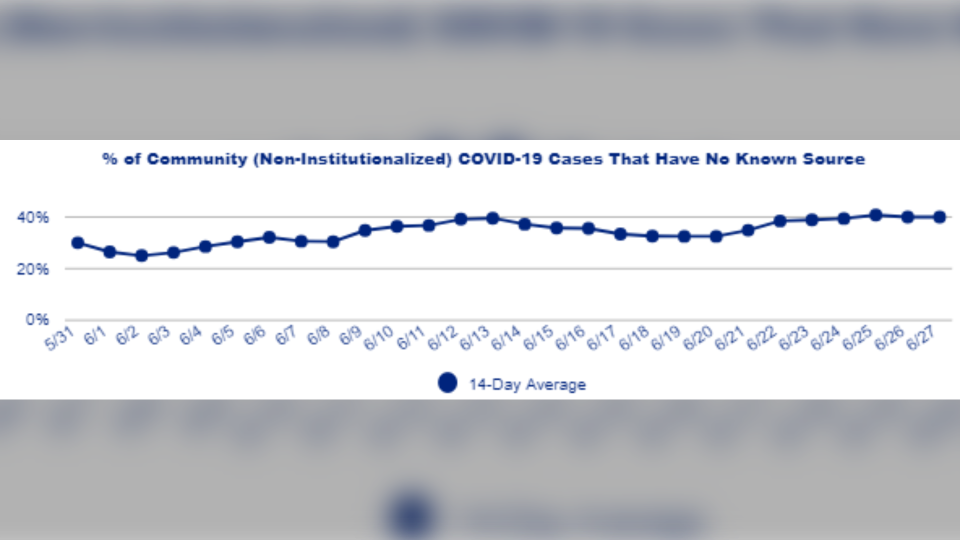 The rate of hospitalizations also fell in June. At the start of the month, 39 people were in hospital with COVID-19 complications. By the end of the month, there were two, with one in intensive care.

Full details can be seen at Ottawa Public Health's COVID-19 Dashboard page, which is updated daily. 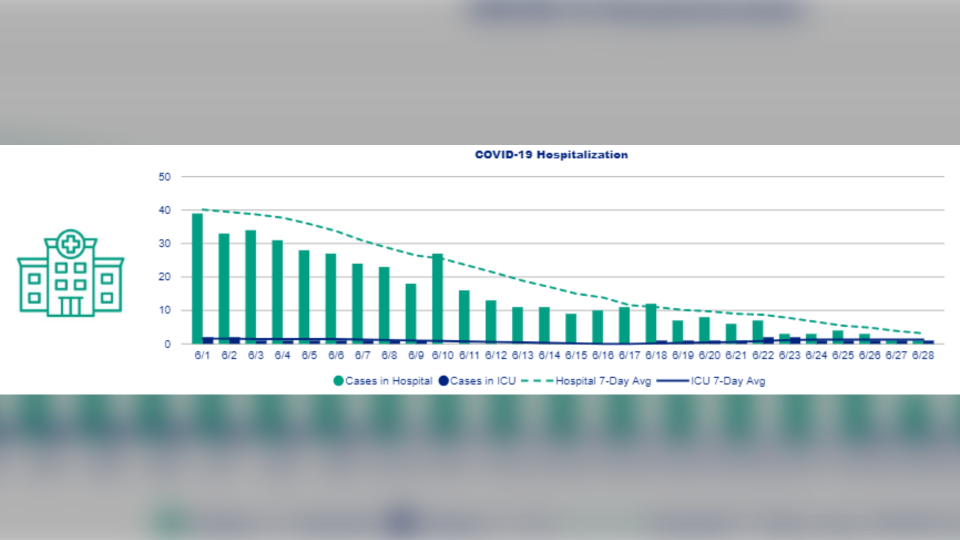 Holding the line in July

Ottawa’s medical officer of health, Dr. Vera Etches, says Ottawa has done well to flatten the curve of COVID-19, but the risk of a second wave is real.

“We are seeing second waves emerge in other parts of the world and, while we are fortunately in a much better position here in Ottawa at this point, we are also at risk of a second wave,” Dr. Etches said in a statement on June 29. “We can watch other countries and communities to learn about what works to control COVID19 and adapt approaches to what is appropriate for our city.”

A recent outbreak at a Kingston, Ont. nail salon has led to 30 cases in that city. None of the affected individuals have been hospitalized, but it shows how easily one case can turn into dozens. Recently lifted lockdowns in some parts of the U.S. have been reinstated as cases continue to surge south of the border.

With 40 per cent of all new cases in Ottawa linked to community transmission, Dr. Etches said all of these figures are based only on what has been confirmed by laboratories.

“Currently case numbers are steady, outbreaks are decreasing and we are maximizing testing and contact tracing capacity. This is good news, but the positive case numbers you see updated on our website every day are still just a fraction of the infections truly present in the community,” Dr. Etches said.

“The risk of an increase in COVID19 cases and outbreaks is real. Modelling data shows that a decline of just twenty per cent in public control measures could lead to a second wave. Our actions influence whether a second wave occurs and its severity. Ottawa residents have already shown that they are capable of doing what needs to be done to keep the virus at a manageable level.”

The next step for Ottawa could be a mandatory mask order. Those rules are already in place in Kingston and set to go into effect in the Eastern Ontario Health Unit’s jurisdiction. The City of Toronto also recently passed a by-law making masks mandatory in indoor public spaces starting July 7.

Dr. Etches said she is “seriously considering” a similar mask order, and Ottawa Mayor Jim Watson said he would not be opposed.

The Ontario government is currently discussing how to move regions into the third stage of its reopening framework. Health Minister Christine Elliott said she is waiting for another week’s worth of data before going ahead.

Stage 3 would allow the size of public gatherings to increase and all workplaces to open, according to provincial guidelines.

Active COVID-19 cases in Ottawa drop to just over 200