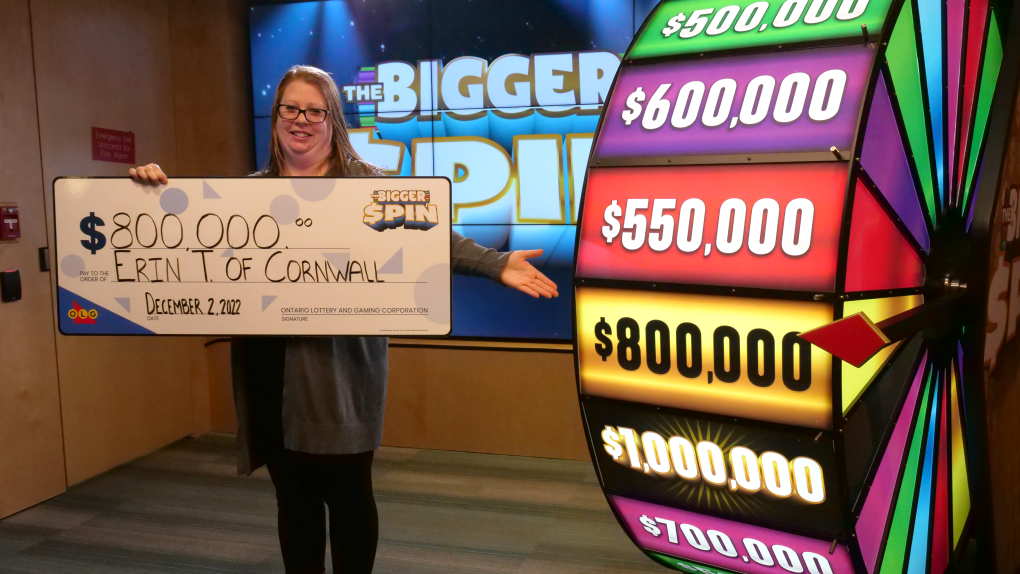 A Cornwall, Ont. resident is $800,000 richer after winning a prize playing The Bigger Spin game.

Erin Taylor, who says she has been regularly playing the lottery since she turned 18, told OLG she played her ticket after a family dinner and headed straight to the store.

The Bigger Spin is a three-step $10 lottery game. If you scratch your ticket and it says ‘Spin,’ you visit any OLG location to validate the ticket and watch an animated spinning wheel on a screen.

Taylor bought her winning ticket at the Esso on Marleau Avenue in Cornwall. When her ticket landed on Bigger Spin, she said she was shaking with excitement.

“The excitement pulsed through my whole body – I had a hard time sleeping that night,” she said, according to an OLG news release.

At the OLG Prize Centre, her family and friends watched her spin her way to an $800,000 win.

"It was spinning for a long time. When it started to slow down and finally landed on $800,000, I was shocked! It was wonderful to see the faces of my shocked and happy family cheering me on.”

Taylor said she plans to put some of her win aside for retirement and use some toward a kitchen renovation so she can host family dinners. She is also considering planning a fun family trip.

The U.S. military on Saturday shot down a suspected Chinese spy balloon off the Carolina coast on orders from President Joe Biden, after it traversed sensitive military sites across North America, becoming the latest flashpoint in tensions between Washington and Beijing.

Marit Stiles officially became the new leader of the Ontario NDP on Saturday after a majority of party members voted in favour of the lone candidate.

Eyes on the sky as Chinese balloon shot down over Atlantic

Eyes were locked on the skies Saturday as a suspected Chinese spy balloon passed over the U.S. Eastern Seaboard -- where local authorities warned civilians against taking potshots with rifles -- before it was shot down when it drifted over the Atlantic Ocean.