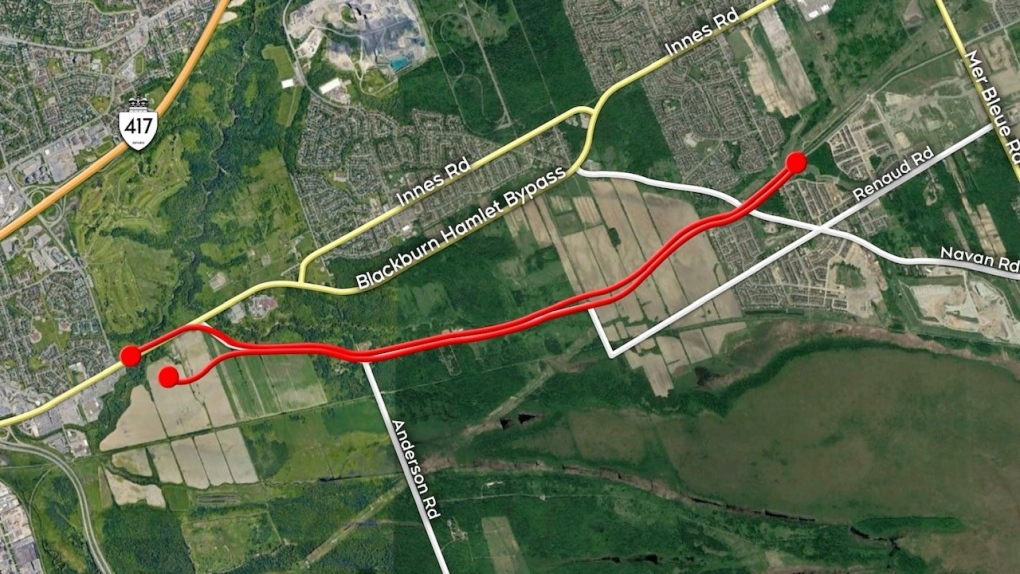 The proposed route of an extension of Brian Coburn Boulevard.

OTTAWA -- The city is looking to extend a road in the east end which, if approved, would be near the Mer Bleue Wetland.

The City of Ottawa is completing the Brian Cobourn Boulevard / Cumberland Transitway (Navan Road to Blair Road) environmental assessment study. A final public consultation is being held virtually with a deadline of this Friday at 5 p.m.

Area councillors say the extension is needed to help with the growing traffic from the many additional homes in the area.

“Unfortunately, the transportation infrastructure just has not kept up,” says Coun. Catherine Kitts. “We’re in a situation now where all of our roads are beyond max capacity, and residents are getting really frustrated and we need a solution.”

The city recommends an option which would extend Brian Cobourn Boulevard past Navan Road and to the west, and near northern part of the Mer Bleue Wetland.

Kitts says she favours that option, which came from the community.

“All east-end councillors, our MPP, our MP, the mayor’s office—we’re all in agreement that this is the preferred option.”

Some residents are concerned about an environmental impact to the wetland.

“The expansion and extension of this road so close to the boundaries of the Mer Bleue wetland is a threat in a number of ways to its’ ecological integrity,” says Jakob Mueller, who is the president of the Ottawa Field-Naturalists’ Club. “It can bring disruptions to water flow, increased pollution, increased road traffic, disruption to the movement of wildlife.”

He wants to see a different approach.

“It seems to be the least impactful ecologically,” says Coun. Matthew Luloff, who is supporting the city’s recommended option, “and certainly will go much further than any other option on the table right now to reducing traffic and ensuring that we have a proper, active transportation corridor.”

The proposed extensions would also see a rapid bus transit expansion past the Chapel Hill Park and Ride.

“My family and I really, really enjoy Mer Bleue; I’ve been going there since I was a boy,” says Luloff. “Nobody wants to see that disturbed whatsoever.”