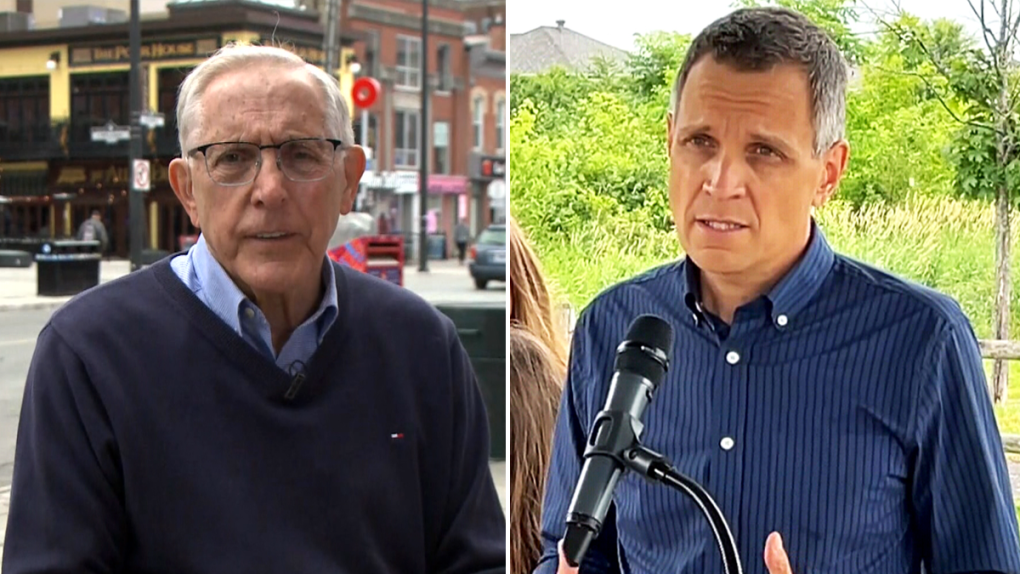 Bob Chiarelli (left) is accusing the Mark Sutcliffe campaign of spreading rumours that Chiarelli would drop out of the mayoral race.

Ottawa mayoral candidate Bob Chiarelli is accusing the Mark Sutcliffe campaign of spreading rumours that Chiarelli would drop out of the mayors’ race before the deadline last month.

The move was a “specific strategy” and a “dirty trick” designed to hamper the Chiarelli campaign’s fundraising efforts, the former Ottawa mayor and regional chair told Newstalk 580 CFRA.

It’s the latest example of the Ottawa mayoral race heating up with election day less than two months away.

Chiarelli made the allegation after host Graham Richardson asked him whether he would see the race through to Election Day.

“With all due respect, that’s a ridiculous question,” Chiarelli said. “I’m nominated, I’m registered … how could anyone suggest or feel that I’m going to be dropping out?”

Chiarelli announced his intention to run for mayor in December and filed nomination papers on the earliest possible day, which was May 2. Sutcliffe entered the race in late June.

The deadline to register for the municipal election was Aug. 19.

Chiarelli said before then, a “very, very senior person” in the Sutcliffe campaign approached a current councillor and several community newspapers and told them Chiarelli would drop out.

“It was a strategy of the Sutcliffe campaign to tell people that I was going to withdraw before the deadline,” he added.

“They tried to blunt our fundraising, and it was a dirty trick. And we worked through it, we didn’t make any issue of it at the time,” he said. “But we had to do some convincing to tell people 'No, we’re serious, we’re going to be there on Election Day.'"

Sutcliffe told CTV News Ottawa he did not know what Chiarelli was talking about.

“I have no idea what Bob is talking about,” he said. “I have a lot of respect for Bob, we have always gotten along well. I just think it’s time for change.”

“You want to pay higher municipal taxes? Vote for Catherine McKenney,” he said. “If you like the current council, if you want the status quo, vote for Watson 2.0 Mark Sutcliffe, a candidate personally chosen by the mayor.”

The perceived mayoral frontrunners have started to target each other directly with fewer than eight weeks remaining until election day on Oct. 24. This week, the Sutcliffe team has gone after McKenney, accusing them of flip-flopping on the issue of free transit.

In response, McKenney said they want to see transit fares eliminated in Ottawa eventually, but clarified it’s a long-term goal and never said that they would bring in free transit overnight.