OTTAWA -- As the snow keeps falling, the snow structures around the city keep growing and one family in Barrhaven has made their snow fort an annual tradition, with special meaning.

David Grimes is what some might consider a master at building snow castles.

“I’ve been building snow forts since I was six years old,” said Grimes. “Basically, we used pieces of plywood and put them side by side like concrete forms so the snow doesn’t need to be packing snow. We just pat it down and it gets to be hard as rock, which is fitting for a castle.”

Every winter for more than 10 years, the Grimes family rounds up as much snow as possible to create the biggest fort on their block.

His kids Katie and Liam are part of the team that helped shape this castle. Fourteen-year-old Liam has special needs, so having the chance to make something from scratch means a lot to him.

“It’s like a tradition that they build together, and they’ve done it ever since he was little,” said Katie. “So I think it’s something very important to him and he takes a lot of pride in it because it’s something that he’s good at.”

“Liam loves to be outside,” said Grimes. “He’s disabled. He has sort of limited capabilities and interests. But he loves being outside and he loves doing this.”

Of all the forts that Liam and his father have built together, this is by far his favourite. A two-storey castle, complete with a front door and double turrets with extra high walls. 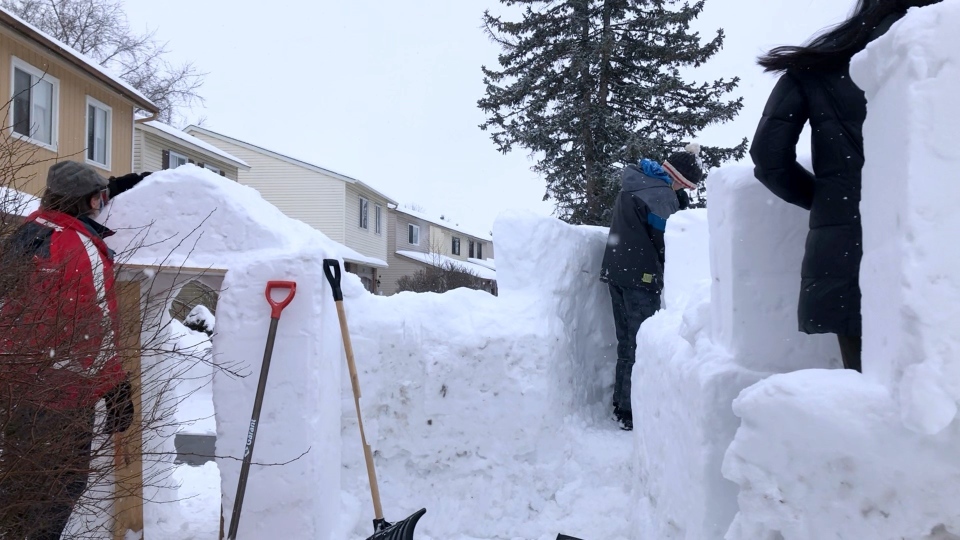 “Since he was little we’ve been building forts. And as he gets bigger and stronger and can lift the snow further, and throw it higher we just make it bigger,” said Grimes.

Not a day goes by that Liam isn’t outside spending as much time as possible in his frozen fortress.

“He wakes up every day asking if he can go play in his fort,” Katie said.

Most of the time is spent looking out over the sidewalk in his favourite spot atop the turrets.

For Liam, building snow castles isn’t the only thing he loves about winter.

The Grimes family will be moving into a new house next month that can hold double the snow. Grimes is already planning to make their next creation the biggest yet.

“I figure if it's not a two storey snow fort, then what’s the challenge?” he laughed.