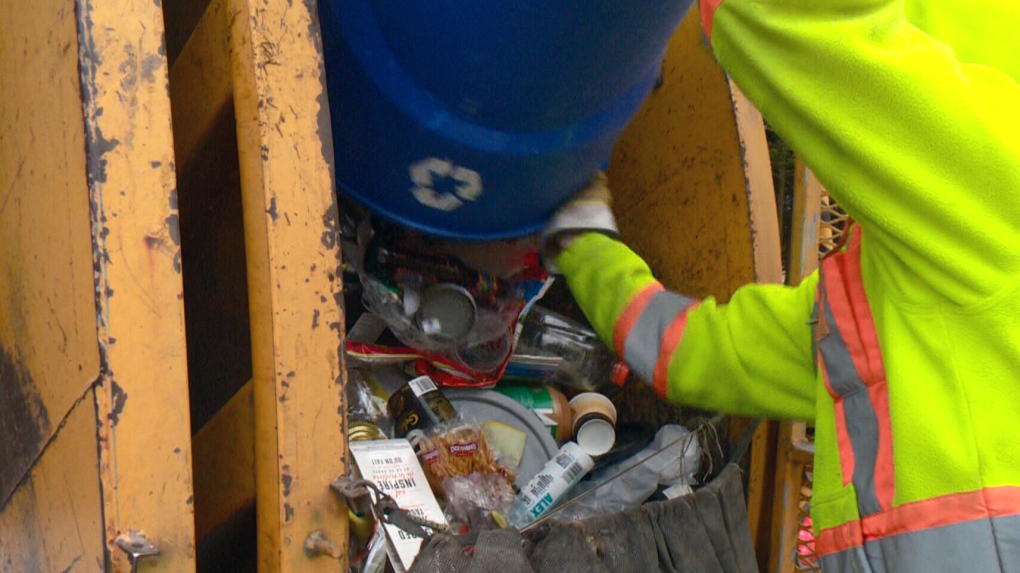 A collector empties a recycling bin in Ottawa.

OTTAWA -- Garbage and recycling collection will be delayed in several parts of the city by one day for the rest of this week after two waste collection employees came into contact with someone who has COVID-19.

Director of Solid Waste Services Shelley McDonald said two operators at Miller Waste Ottawa were in contact with a person that tested positive for the virus.

The operators are now in 14-day self-isolation.

“As a responsible and precautionary measure to protect their staff, Miller has suspended operations for one-day to complete an assessment of all employees,” said McDonald in the statement.

The City says vehicles and the staff facility are disinfected daily and staff have been following all personal protective protocols put in place during the COVID-19 pandemic.

Ottawa Public Health has assessed the risk to customers as being very low.

According to the City of Ottawa, waste collection in Zones 2 and 4 is delayed by one day. Residents are encouraged to check the City's online calendar to see if their collection date has been moved.

In an update, sent Tuesday afternoon, the City said the following areas, which were scheduled to have garbage collection on Monday, are having their waste collected Tuesday: Alta Vista, Elmvale Acres, Playfair Park, Ridgemont, Rideauview, Fisher Glen, Ashdale, Merivale and Pineglen.

Several more areas will continue to see a delay through the rest of the week.

Tuesday's collection in the following areas will be rescheduled for Wednesday:

The following areas will have their collection day moved from Wednesday to Thursday:

These areas will have their collection day moved from Thursday to Friday:

And residents in these areas will have their collection day moved from Friday to Saturday:

The City says the following wards will continue to have waste pickup at their regular times.

A previous version of this article quoted Emergency and Protective Services General Manager Anthony Di Monte, who told reporters that that a Miller Waste employee had tested positive. Mr. Di Monte was incorrect. The City later clarified to say no employees of the waste collection company have tested positive but two had come into contact with someone who did.

The article has since been corrected to make that information clearer.