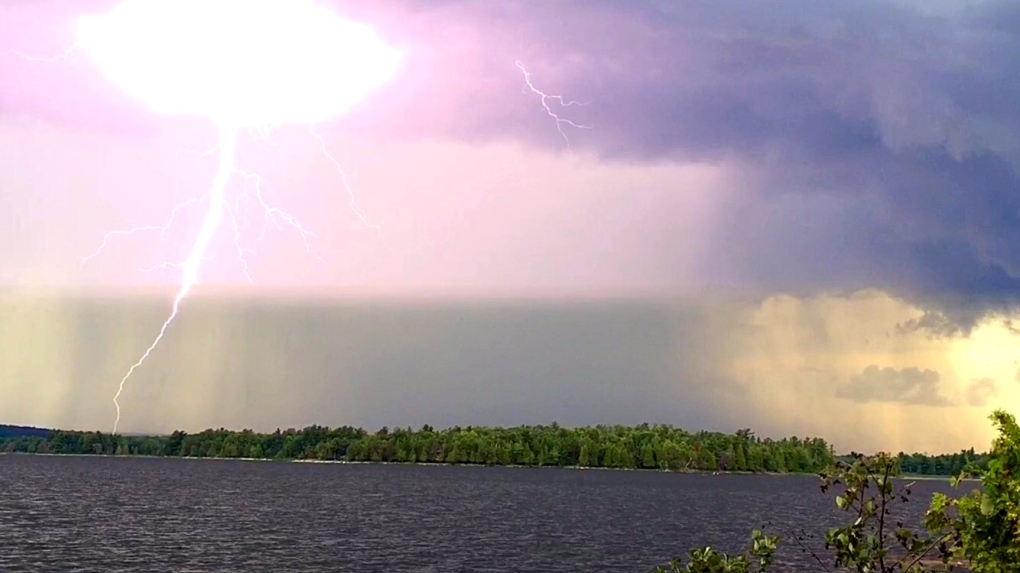 OTTAWA -- A line of severe thunderstorms weakened as it moved across Ontario Sunday afternoon.

All severe thunderstorm watches and warnings for Ottawa and the region have ended.

Storm watches and warnings came and went across much of eastern Ontario Sunday afternoon as the thin band of intense rainfall moved from the Georgian Bay area toward the capital.

The storm's strength appeared to weaken on radar images as it approached Ottawa, though a brief severe thunderstorm warning was in place for Ottawa South, Richmond and Metcalfe.

Earlier in the day, the watch for Ottawa included mentions of the possibility of 100 km/h wind gusts and the risk of a tornado.

"Thunderstorm development will weaken and move east of the area this evening," the advisory from Environment Canada said.

While the storms have since moved away, heat warnings remain in effect for Ottawa-Gatineau and parts of eastern Ontario to the east and south of the capital.

A storm also passed by early Sunday morning, dumping 10 to 20 mm of rain, according to Ottawa weather historian Rolf Campbell on Twitter.

11 mm of rain was the official total at the Ottawa Airport, according to Kimbell, but more was recorded at other weather stations.

Officially, at the Ottawa Airport, 9.3 mm of rain was recorded for the whole month up to July 18.

"It's certainly been very dry," said Kimbell. "The farmers have been telling us it's been very dry this summer."

The storm passed through the region starting at around 5 a.m., bringing "lots of lightning," Kimbell said. "No big wind gusts that I'm aware of, but lots of lightning and thunder that woke people up, and 11-21 millimetres of rain."

Sunday's forecast starts mainly sunny, but includes a 70 per cent chance of showers and the risk of a thunderstorm in the afternoon.

A heat warning remains in effect.

Environment Canada's severe thunderstorm watch says the coming storm could bring wind gusts of up to 100 km/h and a risk of a tornado.

Kimbell says the storm line is moving east from Georgian Bay and is expected to reach the Ottawa area between 3 p.m. and 4 p.m.

A 30 per cent chance of showers lingers into the evening. The overnight low is 20°C.

Monday's forecast is mainly sunny with a high if 29°C and a humidex of 34.

Tuesday could see a few clouds, with a high of 26°C.

Wednesday's outlook is cloudy with a 40 per cent chance of showers and a high of 23°C.

Kimbell said the month of July in Ottawa is approaching an all-time record for monthly mean temperature. So far, July 2020's mean temperature is 24.2°C, which is just shy of the 1921 record of 24.9°C.

"So, 99 years ago, you had a hotter July," Kimbell said. "Now, I'm comparing apples to oranges a little bit because the 1921 record is for the whole month, while the one for July so far is up to the 18th, so things could change."

Staying cool during the heat wave