Some residents in downtown Ottawa standing up to the trucker convoy 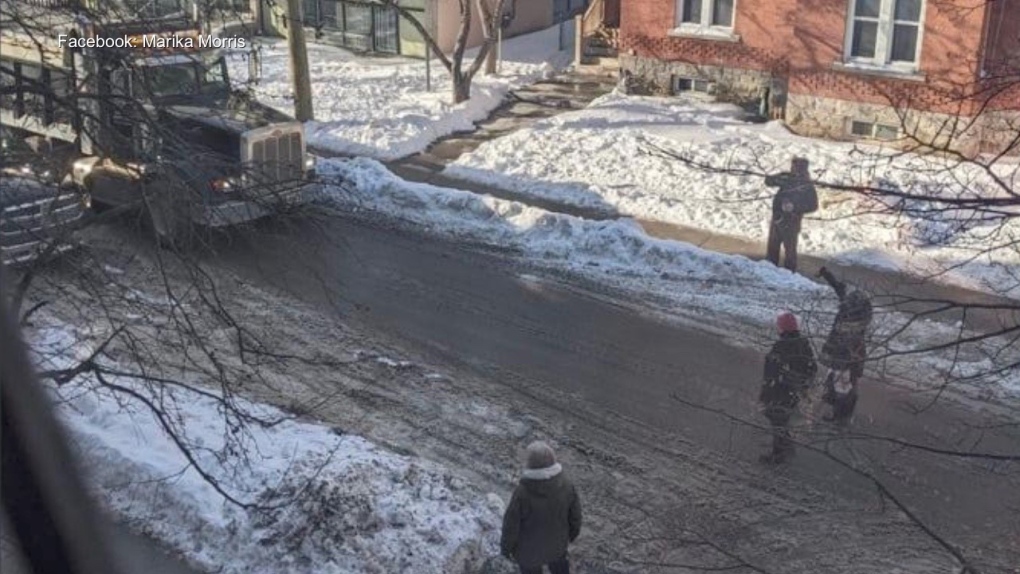 Marika Morris says she and some of her neighbours stood on the street to stop the "Freedom Convoy" protesters from continuing to drive around their neighbourhood. (Photo courtesy of Marika Morris)

Marika Morris lives in a residential area near Metcalfe Street in Ottawa's Centretown neighbourhood. She says for the past three days, there have been two columns of trucks, back-to-back, taking up two of the three lanes.

She says the trucks have been circling her streets blaring their horns. On Tuesday, Morris and her neighbours had enough and stood outside in the middle of the road blocking the convoy from moving. Morris giving them a thumbs down each time they blew their horn at her.

“It was just a spur of the moment thing actually,” says Morris. “We just went out into the street. They were coming really slowly, honking, with a line of people behind them honking. They were blocking all access to any emergency vehicles. They literally don’t care whether we live or die.”

Morris says residents in the area feel trapped inside their homes, afraid to go outside, and seniors in the area are not able to have their prescriptions dropped off because delivery vehicles can’t get around the trucks.

“At night, there’s drunken yelling,” says Morris. “And they come and they defecate just under our balconies. It’s beyond unpleasant, it’s really out of bounds. And there doesn’t seem to be anybody enforcing the law.”

Ottawa police chief Peter Sloly says "all options are on the table" when it comes to ending the demonstration and returning the city to a sense of normalcy, but he said the police service's ability to enforce the law has been hampered by the "large size, dynamic and dangerous nature" of the demonstration.

The Ottawa Police Service has set up a dedicated hotline to report any criminal activity related to the demonstration. So far, 12 active investigations are underway into various allegations, including bribery, threats, assault and dangerous driving.