Remembrance Day marked in Ottawa under cloud of COVID-19 pandemic

OTTAWA -- The National Remembrance Day ceremony in Ottawa was much quieter than usual this year, as the Royal Canadian Legion urged residents to stay away, due to the COVID-19 pandemic.

Still, some small crowds formed on Elgin Street and Sparks Street to witness the annual ceremony in person, from behind barriers set up ahead of time.

As the National Remembrance Day Ceremony gets underway, a few dozen residents have gathered on Sparks Street though the public was encouraged to watch online during the pandemic #LestWeForget pic.twitter.com/NMkYCR2T3B

There was no veteran's parade, no Canadian Armed Forces parade and a reduced colour party due to the COVID-19 pandemic. The Ottawa Children's Choir, which would normally sing O Canada, God Save the Queen, and a musical rendition of the poem "In Flanders Fields" was not present, save for three members.

Many wreaths were already laid around the cenotaph in advance.

Soldiers in attendance, as well as dignitaries, including Governor General Julie Payette, Prime Minister Justin Trudeau and his wife Sophie Gregoire Trudeau, and Canada's National Silver Cross Mother Debbie Sullivan, wore masks during the ceremony. Some were decorated with poppies or phrases such as "Lest We Forget".

This year's ceremony marked the 75th anniversary of the end of the Second World War, but the current reality of the COVID-19 pandemic was top-of-mind.

"On this day when so much has changed since the last time we gathered, may we be comforted by the words from Her Majesty the Queen to Canadians in the context of this pandemic," said Maj.-Gen. Guy Chapdelaine, a Roman Catholic priest who is chaplain general of the Canadian Armed Forces. "Hope is to be found in the care given to the vulnerable and to those in need."

A planned flyby of military aircraft over downtown Ottawa after the ceremony was cancelled because of the weather. The sky was gloomy and some showers fell Wednesday morning.

A small ceremony was held at the cenotaph in Brockville on Remembrance Day.

"I thought the ceremony was very subdued like it should be and I thought the public was very respectful," said Ralph McMullen, President of the Brockville Royal Canadian Legion Branch 96.

There was a small crowd at the cenotaph, respecting the physical distancing guidelines during the COVID-19 pandemic.

"People have certain reasons why they want to show up. I have a friend of mine, he moved to Canada from Holland, and he says there's no way… that I'm not going down to pay my respect," said McMullen.

"I just want to thank everybody for their cooperation. Everybody respected what the government and health unit asked them to do and I thank them for doing that." 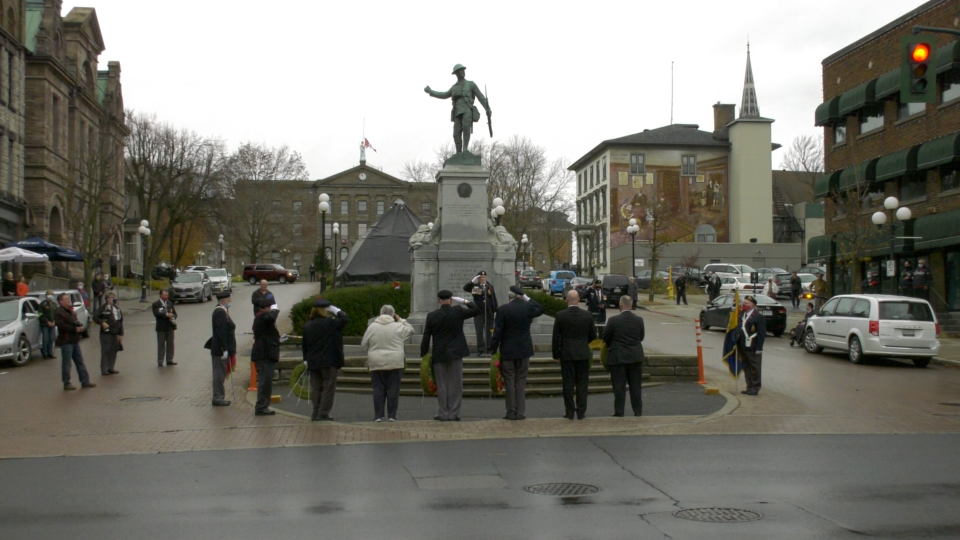