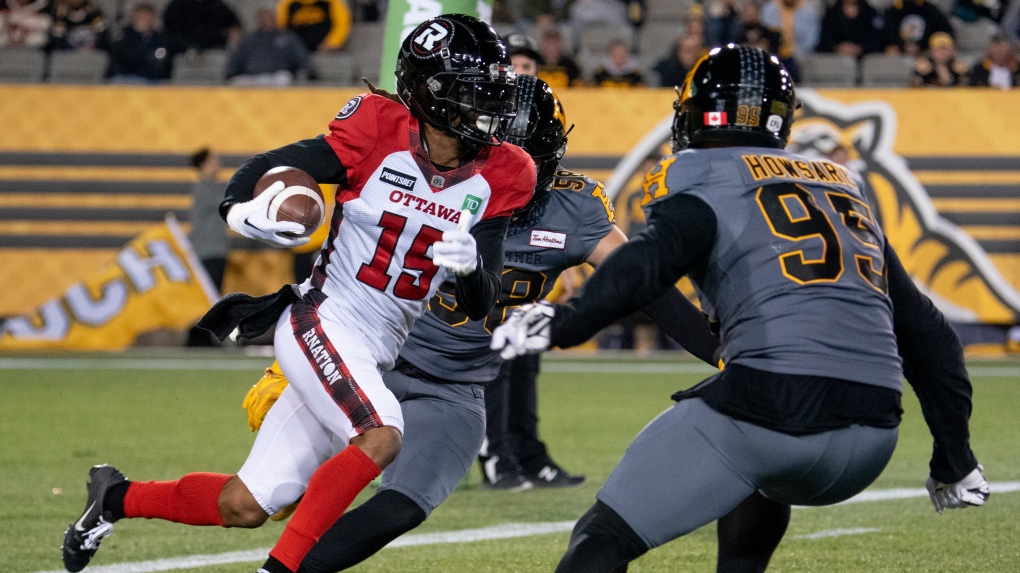 Small's 30-yard field goal in a brisk wind on the final play earned Hamilton an exciting 30-27 CFL victory over the Ottawa Redblacks on Friday night.

The Ticats (7-10) moved ahead of Saskatchewan (6-10) in the battle for the third and final East Division playoff spot, with the Riders playing the Calgary Stampeders (10-6) on Saturday night.

Regardless of what Saskatchewan does, Hamilton can cement third with a win next week in Ottawa. The Redblacks (4-13), who were eliminated from post-season contention with the loss, are 0-8 at TD Place.

Hamilton finishes the regular season 6-3 at Tim Hortons Field, having won six of its last seven there.

"It's exciting, I think it's something this team has earned," Small said. "We didn't start the best at the beginning of the season but we've kind of found our true self and who we are and Coach Oh (head coach Orlondo Steinauer) has led that.

"We're excited about where we're going. We're getting hot for a Grey Cup."

Small's fifth boot of the game capped a 45-yard, six-play drive into a brisk 30-kilometre wind. Veteran Matt Shiltz replaced injured starter Dane Evans (right thumb) in the fourth quarter and had a key 25-yard run on the final march.

"It was a typical Hamilton wind out there," Small said. "You can allow it to be a factor as much as you want it to be.

"I told (Ticats coaches) the 40-yard line before the game was where I felt comfortable. You just try to hit a pure ball and it will go straight."

"I think CFL stands for Crazy Fun League," said Small, in his first season with Hamilton. "I'm having a blast up here."

Ottawa's Caleb Evans set a single-season CFL record for rushing TDs by a quarterback. He ran for two majors, giving him 15 before a Tim Hortons Field sellout of 24,062 spectators.

Ottawa did all of its scoring with the wind -- 21 points in the second, six in the fourth. Hamilton managed more points going into the breeze (14 in the fourth) than it did with it (13).

Dane Evans put Hamilton ahead 24-21 just 22 seconds into the fourth. After scoring on a two-yard run, Evans found Tyler Ternowski on the two-point convert but left later in the quarter with a right thumb injury following an 11-yard run.

"It's the CFL and two quarterbacks are going to have to play," Shiltz said. "We'll see how Dane is feeling and I'm praying he's going to be OK but if not, it's like any other position on the field, it's next man up. That's my mentality."

Shitlz finished three-of-four passing for 43 yards. Evans completed 16-of-29 passes for 220 yards and an interception and also lost a fumble.

"I can't say enough," Steinauer said of Thomas Erlington. "That guy just shows up when called upon, he's steady.

"He took some shots and fell forward and was able to allow us to keep the run going."

Arbuckle finished 19-of-27 passing for 166 yards as Ottawa lost the contest despite winning the turnover battle 4-1.

"It's not often you're going to win a bunch of games when you lose the takeaway battle, but it just shows it can be done," said Steinauer. "We had the wind to start the half but we didn't do much with it until the very end, and that was the key thing.

"We've done a decent job throughout the season ... of actually moving the ball into the wind and coming away with some sort of points."

Brandin Dandridge had the other TD for Ottawa. Ward kicked the converts and two field goals.

Evans scored both of Hamilton's touchdowns. Small added the converts.

Ottawa led 21-13 at halftime, scoring all of its points in the second quarter with the wind. Hamilton put up 10 points in the first.

Dandridge put Ottawa ahead 14-10 at 3:38. He scored on a 51-yard return after stripping Hamilton receiver Steven Dunbar Jr. following a 15-yard reception.

It came shortly after Evans' two-yard TD run pulled Ottawa to within 10-7 at 2:44 to finish a 10-play, 81-yard march on the Redblacks' first possession with the wind.

Hamilton opened with the breeze at its back after Ottawa won the toss and deferred. The Ticats had a lost fumble, punt and missed 53-yard field goal attempt on their first three possessions before Small opened the scoring with a 37-yard field goal at 8:05.

This report by The Canadian Press was first published Oct. 21, 2022.