Rainfall record set on Friday but you might not have noticed 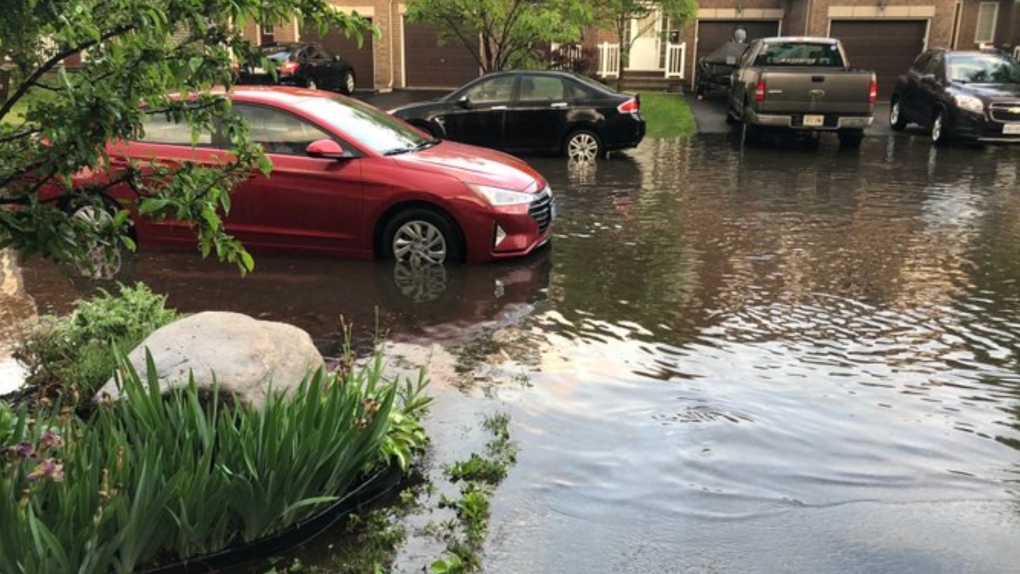 A brief but heavy rain shower left behind large puddles in parts of Ottawa June 5, 2020, while other parts stayed dry. (Photo courtesy of Sarah H. / Twitter)

OTTAWA -- A powerful band of thunderstorms dumped a record 52.1 mm of rain on the Ottawa Airport on Friday, but unless you lived in a narrow area of the city, you probably didn't notice.

The storm started at around 6:50 p.m., according to historical radar data, and formed a thin band of heavy rain and thunderstorms that moved quickly to the east and out of Ottawa about two hours later. Some areas only saw rain activity for ten or twenty minutes before the sky cleared up again, the radar suggests. 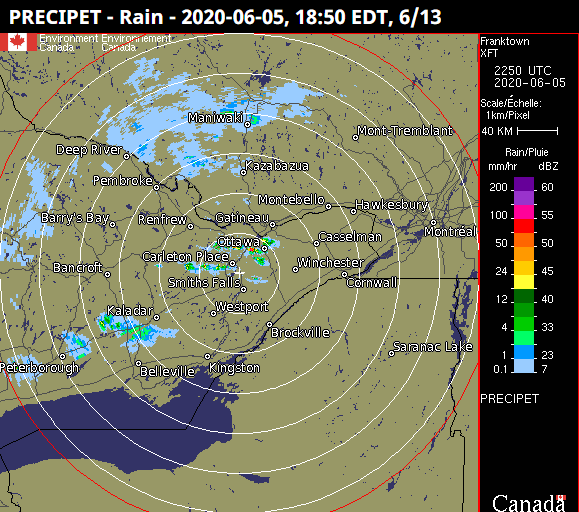 Severe weather meteorologist Mark Schuster, of Environment Canada, tells CTVNewsOttawa.ca, these types of storms are common in the summer months.

"It's not unusual to have one area get a ton of rain and another to get almost none," he said.

Ottawa's geographic area is quite large, but official records are kept at the Ottawa Airport. It just so happened Friday's storm moved right over it and hit it hard.

There were thousands of people in downtown Ottawa Friday afternoon and evening for a Black Lives Matter march, and barely a drop of rain was felt.

A previous record of 36.4 mm of rain was set on June 5, 2016. This latest record smashes it, but Schuster said this wasn't a major storm in the traditional sense.

"Sometimes you'll see events like this where you get a lot of rain in a short period of time and it's the rainiest day on record, but while 52.1 millimetres of rain is a significant amount, it wasn’t a significant event, if that makes sense," he said.

Some volunteer weather watchers in the path of the storm reported anywhere between 25 and 50 mm in their respective neighbourhoods.

Schuster said Environment Canada was not aware of any reports of localized flooding or damage in the path of the storm.

One Twitter user told CTV the rain left behind a large puddle in her neighbourhood.

We got the rain in Bridlewood. (Photo taken around 8pm last night...) pic.twitter.com/PsYxxS0tZ5

Others said they definitely noticed the rain.

Major rain, west side but only for 40mins or so.

Got SOAKED on Stittsville Main taking our evening walk!

Im in Embrun and went from home to Hunt Club. DEFINITELY noticed. We had to drive with our four-ways on and the thunder/lightning was crazy.

Others said not a drop outside their windows.

Dry as a bone in downtown Hull.

Despite the lack of any significant rain downtown, MAJIC 100's Janel Steeper caught a rainbow not long after the Black Lives Matter march Friday.

That’s a rainbow over the US Embassy after today’s peaceful protest. #ottawa #BlackLivesMatter pic.twitter.com/Bu9ImV8su9