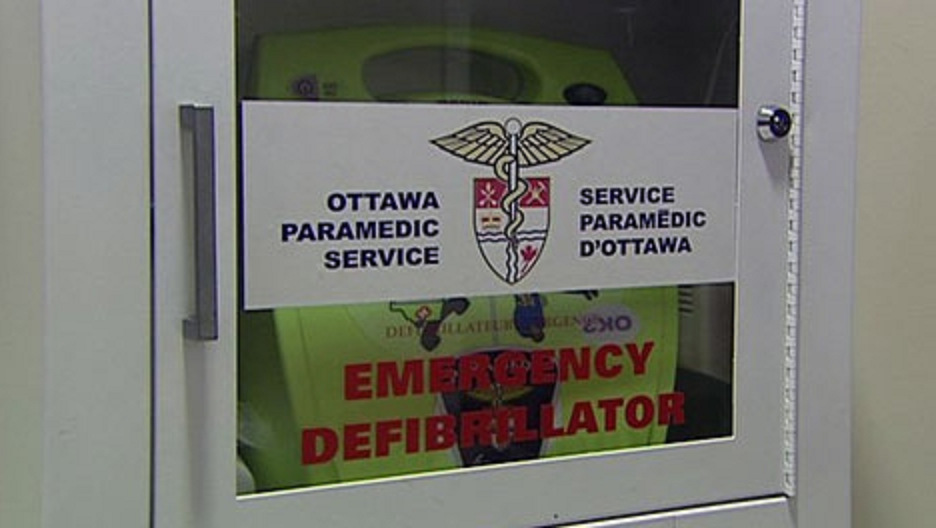 OTTAWA -- Public access defibrillators are being credited with helping to save the lives of three people in Ottawa over the past six days.

Ottawa Paramedics say between last Friday and Wednesday morning, bystanders used a PAD to treat three patients who went into cardiac arrest in a public place.

Ottawa Paramedics advanced public training instructor Chris Stroud tells CTV News Ottawa the PAD is “incredibly important in public places. A lot of these places are in areas of high risk where people have high levels of physical activity and therefore susceptible to cardiac events.

Around 7:20 a.m. Wednesday, a man in his 60s suffered cardiac arrest at an office building on Bank Street.

Coworkers immediately began CPR, and two shocks were delivered by a public access defibrillator. When paramedics arrived on scene, a third shock was delivered and the victim regained consciousness.  The victim was transported to hospital in serious but stable condition.

On Monday night, a man in his 50s went into cardiac arrest while playing badminton at A. Lorne Cassidy Elementary School in Stittsville.

Bystanders quickly started CPR and school staff grabbed a public access defibrillator. Three shocks were delivered from the PAD to the patient prior to the arrival of paramedics. The victim regained consciousness en route to hospital, and was in serious condition in hospital.

In a media release, paramedics said “we’d like to thank all of the bystanders involved who quickly identified a medical emergency and responded accordingly by calling 911, obtaining the nearest PAD and starting compressions.”

Last Friday, the quick actions of teammates and arena staffed were credited with saving the life of a hockey player at R. J. Kennedy Arena in Cumberland.  When the man in his 50s collapsed on the bench, teammates began performing CPR while staff rushed to grab the onsite public access defibrillator.

Paramedics said a single shock from the PAD was delivered, restoring the victim’s heartbeat.

In 2017, Paul Dogra was playing hockey at the University of Ottawa when he collapsed on the ice. Luckily a doctor was playing on the same night and knew a PAD was on site.

The public access defibrillator on site saved Dogra’s life, and now he discusses his ordeal to help others become comfortable using one if the situation arises.

“it’s something I took for granted and I think a lot of people do. They walk past it. It’s in the lobby. They see it but they don’t really comprehend. I think you really need to be touched by one.”

Dogra adds “one thing I realize is how critical seconds are in terms of just getting someone when they are in need. Every second counts.”

The Ottawa Paramedic Service offers First Aid and CPR courses for residents, which includes a lesson in how to use a public access defibrillator.

Stroud says “our perception of them comes from Hollywood and often the over exaggeration of what you see there. We do hold courses and encourage people to take them.”

“The courses increases the users comfort level in using them.”