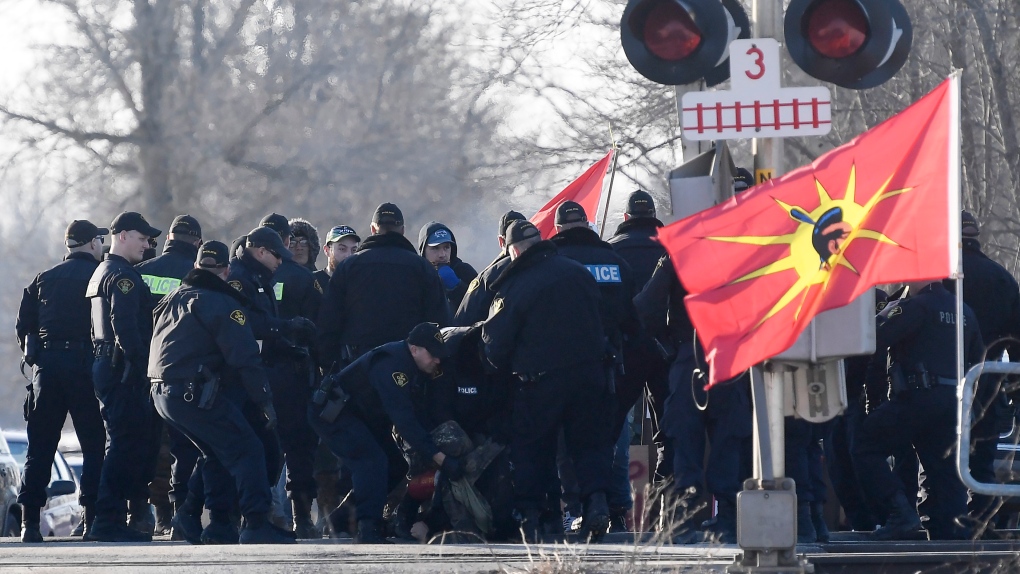 OTTAWA -- Ontario Provincial Police have announced the charges laid against ten people who were arrested Monday at the rail blockade in Tyendinaga, Ont.

The rail blockade was set up in solidarity with Wet'suwet'en hereditary chiefs in northern B.C., who oppose a natural gas pipeline project in their territory. Demonstrators in Ontario were demanding the RCMP leave Wet'suwet'en territory.

The arrests came the morning of Feb. 24, about eight hours after a midnight deadline passed calling on demonstrators to end their blockade, which had stymied rail service in the area for 19 days.

Police say they were notified at 8 a.m. ET that the injunction regarding the blockade would be enforced. Police claim they told demonstrators to leave and warned they could be arrested if they did not comply.

Officers and demonstrators scuffled at the blockade briefly before arrests were made. Police say one person was injured and was taken to hospital for treatment. Their injury was described as minor and they have since been released.

All ten people were charged with mischief over $5000 and disobeying a court order, as well as a Railway Safety Act charge of entering land where line work is situated.

Three people are additionally charged with resisting arrest. One person is also facing a charge of obstructing police.

All ten have been released on bail and are due in court in Napanee, Ont. March 24.

Since the arrests, protests have been held across Canada, including in Vancouver, Winnipeg, and Ottawa.

In Tyendinaga, protesters set fire to the tracks at one point.

Fire lit on the tracks in #Tyendinaga after a train went through a short while ago. This is at Camp B, a few kilometres from where the primary blockade was taken down by police on Monday. https://t.co/LCLmu07QeU

Later, wooden pallets were ignited next to the tracks.

Police in Ontario say their investigation into the protest activity is ongoing.

"The OPP will continue to engage in dialogue, with a reasoned and tempered approach, and proper use of police discretion," the police service said in a press release.

During testimony at the House of Commons public safety and national security committee, Conservative MP Doug Shipley asked Public Safety Minister Bill Blair, on behalf of a constituent, if the rail blockades constitute an act of terrorism.

Blair said they are not.