OTTAWA -- A solidarity rally and march in support of the Wet’suwet’en slowed down traffic through downtown Ottawa Monday.

The “All Eyes on Parliament: Rally for the Wet’suwet’en” began at 9 a.m. across the street from Parliament Hill. The group then marched along Wellington Street, through downtown Ottawa and the ByWard Market before making its way back to Wellington Street.

CTV News Ottawa reporter Christina Succi was with the crowd as it moved through the area.

More people continue to arrive - chanting ‘consultation is not consent’. Rally certainly in the hundreds now. Leaders of the protest say this is a peaceful demonstration. #ottawa #ottnews #cdnpoli @ctvottawa https://t.co/EmswKSSovc pic.twitter.com/S8NkfJaQX9

#BREAKING Hundreds march down Wellington in downtown Ottawa towards a wall of police - more to come. This in support of #Wetsuwenten First Nation amid national crisis. #ottawa #ottnews #cdnpoli #tyendinaga @ctvottawa pic.twitter.com/DrynzspetZ

#BREAKING Tensions escalating. Hundreds march down Wellington in downtown Ottawa towards a wall of police: This in support of #Wetsuwenten First Nation. Organizers say again this is a peaceful protest. #ottawa #ottnews #cdnpoli #tyendinaga @ctvottawa pic.twitter.com/AyBJfH2b5Q

#HAPPENINGNOW Round dance at Sussex and Rideau in support of #Wetsuweten First Nation. We are on hour 4 of the demonstration. It began across from Parliament Hill and made its way through downtown. #ottawa #ottnews #cdnpoli @ctvottawa pic.twitter.com/M4M0ILSZyM

In a statement on Facebook, organizers of the rally said “we need to unite and keep up the pressure in solidarity with the Wet’suwet’en nation!”

Members of the public were encouraged to join Indigenous youth and their allies to pressure Members of Parliament to meet the demands of the Wet’suwet’en, including having the RCMP leave the Wet'suwet’en land in British Columbia and meet with the Wet’suwet’en Hereditary Chiefs.

A small crowd of demonstrators remained on Wellington Street into the evening, with no word on when they might leave.

Rally spokesperson Ganaaboute Gagne told CTV News Ottawa on Sunday “It is a necessity for us to keep coming out. Shutting down Canada is not something that will benefit anyone. But it’s something that has to be done.”

The Mohawks of Tyendinaga have been conducting a rail blockade in Tyendinaga, Ont., outside Belleville, since Feb. 6 in support of Wet'suwet’en hereditary chiefs to stop construction of the Coastal GasLinke pipeline in B.C.

Early Monday morning, several people were taken into custody as police moved in on the blockade. 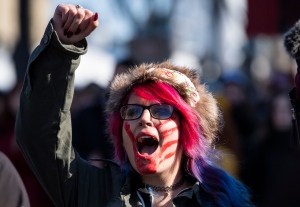