Ottawa police warning residents not to tamper with election signs 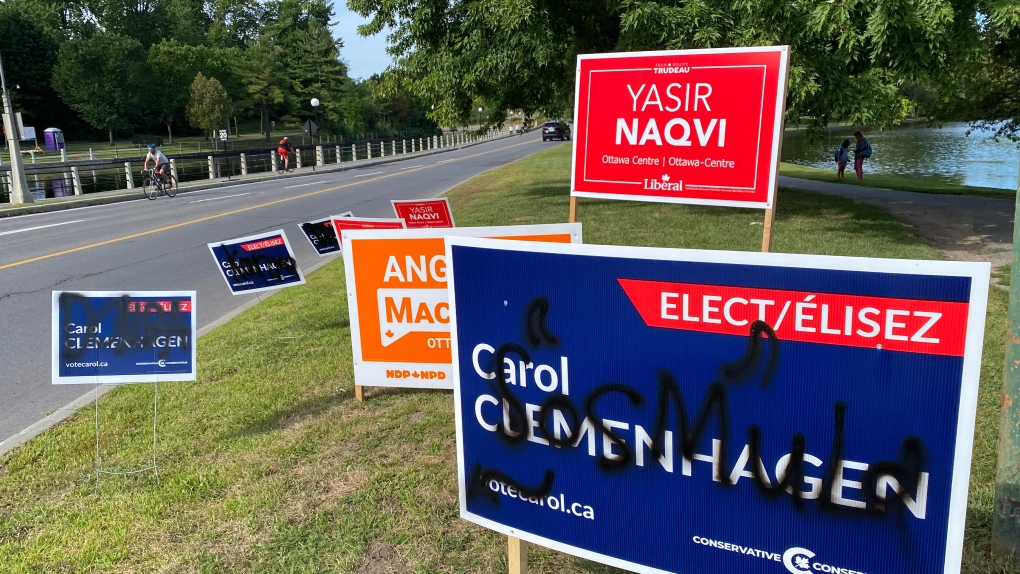 OTTAWA -- Federal election signs are popping up all over Ottawa and they can sometimes be targets of damage or hate-motivated graffiti.

The Ottawa Police Service is reminding residents that tampering with election signs is an offence under the Criminal Code of Canada and the Canada Elections Act and you can face charges for damaging or destroying a candidate's signs, including mischief to property.

Penalties are determined by the courts and are based on factors including whether hate motivation was involved.

Early in the campgain, Liberal candidate Jenna Sudds tweeted images of some of her signs being damaged. Liberal incumbent for Hull-Aylmer Greg Fergus also reported sign damage earlier this month and police said they had received a report of stolen signs in Orleans.

Police said in a release Monday that they have received several complaints on social media but so far only one formal complaint has been filed. Police are encouraging residents to report election sign damage when they see it by calling 613-236-1222.

“We want these incidents reported, particularly if they involve graffiti that is deemed to be hate-motivated,” said S/Sgt. Jamie Aldrich from the hate crime unit. “Anything that promotes hate, violence or intolerance is offensive to everyone in the community.”

Police said in their release that a resident called Monday morning to report seeing two young people damaging signs in the west end. Police arrived and issued a verbal warning to both boys.

None of the tampering was hate motivated in this case.

If you are the owner of a sign that is damaged, you can report incidents after the fact online or through the Police Reporting Unit at 613-236-1222 extension 7300.