Nearly two weeks into the truckers demonstration in downtown Ottawa, police issued a new warning that anyone blocking city streets could be charged with mischief to property.

Ottawa police issued a "message to demonstrators" Wednesday afternoon as hundreds of trucks and vehicles remain parked on Wellington Street and other roads in the area.

"We are providing you notice that anyone blocking streets or assisting others in the block of streets may be committing a criminal offence," said police. "You must immediately cease further unlawful activity or you may face charges."

The service says demonstrators could be arrested without a warrant for blocking streets or assisting others, and vehicles may be seized and possibly forfeited.

"Charges or convictions related to the unlawful activity associated with the demonstration may lead to denial in crossing the USA border."

On Sunday, police warned anyone attempting to bring gas to the demonstrators could be arrested.

During a media conference on Wednesday afternoon, convoy organizer BJ Dichter said the truckers encamped in downtown Ottawa are "upbeat" and morale has not changed.

As the occupation of downtown Ottawa by protesters affiliated with the "Freedom Convoy" continues for a 13th day, there are concerns the group may be expanding to new parts of the city.

A few trucks could be seen parked at the parking lot of a federal government complex near Carleton University. City councillor Riley Brockington said he learned Wednesday morning that police designated the area for overflow vehicles.

"This is in the Confederation Heights Govt. Complex," he tweeted. "Learned this morning that it 'was granted for overflow vehicles at the direction of the Ottawa Police Service to alleviate congestion in the downtown core.' Zero advance outreach with myself or Coun. Menard."

Speaking to city council Wednesday morning, city manager Steve Kanellakos said police made the decision to have vehicles and trucks parked in the parking lot at 1500 Bronson Ave. rather than on residential streets.

"They asked the federal government, who owns the property, to allow some vehicles to park there," Kanellakos said.

He added there were no other confirmed encampments. He said one on Metcalfe Street was dismantled without issue.

Brockington asked Kanellakos why he was not informed. Kanellakos said it's a police decision. No representative from the Ottawa Police Service was available to speak to council as of late Wednesday morning.

"The police direct where the vehicles go and the police manager the logistics of where those vehicles go," Kanellakos said. "They obviously made a decision to have them on 1500 Bronson instead of neighbouring streets, but that's a question to be directed to the police." 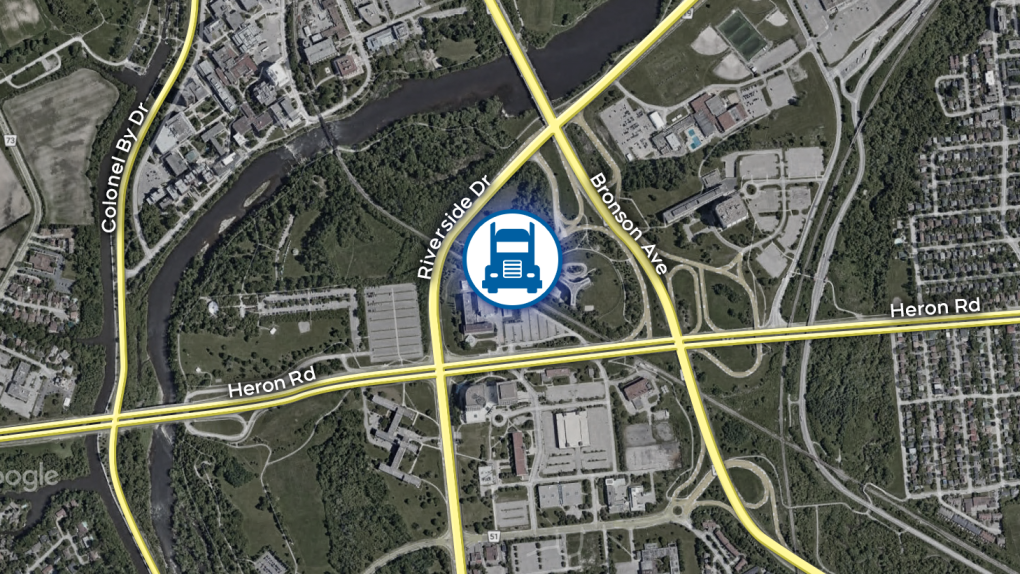 Demonstrators with the "Freedom Convoy" protest in downtown Ottawa were given space in a parking lot on Bronson Avenue to keep them from parking on residential streets, Ottawa's city manager said Wednesday.

Brockington called the use of the land for the truckers "disappointing."

"I'm surprised the federal government would say yes to this, that they would want that within some pretty high security buildings in this immediate vicinity in Confederation Heights," Brockington said.

Kanellakos said many of the trucks were "overflow from the Coventry Road site."

Emergency and protective services manager Kim Ayotte said 154 bylaw tickets were issued in the "red zone" on Tuesday. No vehicles were towed Tuesday, but he said 29 have been towed away since the start of the protest.

The city of Ottawa asked the Chief Justice of Ontario to increase the penalties to $1,000 for violating the Noise Bylaw, the Idling Bylaw, use of Care of Roads Bylaw and the Open Air Fire Bylaw. Ayotte told reporters the new penalties were approved on Wednesday.

A 10-day injunction to cease the honking of air horns and train horns attached to the trucks was put in place Monday, as part of legal action taken by a 21-year-old Centretown resident, but several councillors and residents have asked why the city has not pursued its own injunction.

"To me, it puts council and the city to shame," said Coun. Mathieu Fleury. "I want to understand why we, as a city, can't lead on some of these injunctions. It was successful and it had impact. Why didn't we get ahead of that and what can we do now?"

City solicitor David White said the city is concerned with whether any injunctions they might seek could be enforced.

"As we work with police, the idea is to ensure that whatever we ask the court to prevent people from doing is something that can be fit within a broader police operational plan, appreciating that, like the injunction that was granted, it may only be available for an initial period that's often 10 days," he said. "We need to ensure that whatever we do can be operationalized, can be deployed by police and can be used to the greatest effect and it can actually be enforced."

White said injunctions that are too broad could be rejected by the courts, which risks emboldening the protesters.

"There are risks of proceeding with an injunction—if it's not granted, or even if it's granted but then can't be enforced or if it can be mired in court or appealed. Those are the kinds of things that could, for example, embolden protesters."

White said his team is prepared to move ahead with an injunction if the city and the police can identify just what they would be asking the court to stop.

Speaking to reporters following the council meeting, White denied that the city is hesitant to file an injunction.

"I wouldn't suggest that there's any reticence, but I think that there's an appreciation that an injunction, certainly one brought by the city, is something that should be complementary and in support of the overall police response to the protest. So, that's why there's been co-ordination between my office and the police in that regard."

UNIONS CALL FOR END TO OCCUPATION

A statement from the Canadian Labour Congress is calling for an end to the occupation of downtown Ottawa.

"Canada’s unions have fought for generations for the right to protest. This is a cornerstone of our democratic system. But what we have witnessed on the streets of Canada’s capital over the past 13 days is something different altogether. This is not a protest, it is an occupation by an angry mob trying to disguise itself as a peaceful protest," the CLC said.

The news release, identified as a "joint statement from Canada's unions", condemns the harassment of workers and residents, the hateful messages and symbols witnessed, and statements by the organizers.

"The leaders of this occupation include people who espoused Islamophobic, Anti-Semitic and racist hate on social media, organizers of the notorious far-right yellow vest protests, and people spreading extreme conspiracy theories and calls for violence. This is an attack on all of Canada and not just the people of Ottawa."

The CLC is calling on leaders from all levels of government to end the occupation.

"Over the past 13 days, we have seen an unacceptable lack of leadership from those charged with maintaining the peace and defending public safety. Once this situation has been resolved, Canada’s unions believe it is vital that there be a full investigation into the response by all levels of government to this occupation," the CLC said. "Canada’s unions call on the federal and provincial governments to work together and quickly deliver urgently needed direct supports to the workers and businesses affected."

CONCERNS FOR CHILDREN IN TRUCKS

Ottawa police said Tuesday that several factors are affecting their enforcement tactics, including the presence of children in about a quarter of the more than 400 trucks parked in the core and the fact that several of the vehicles entrenched on downtown streets have been immobilized.

“It’s something that greatly concerns us,” Deputy Police Chief Steve Bell said, when it comes to children living in trucks. “From the risk of carbon monoxide and fumes, the noise levels … we’re concerned about cold, we’re concerned about access to sanitation, the ability to shower. We’re not at the stage of looking to do any sort of enforcement activity around that. We’ll rely on the Children’s Aid Society to give us guidance around that.”

In a news release Wednesday, police said if there are concerns about the safety or maltreatment of a child or youth in Ottawa, residents should call the Children's Aid Society of Ottawa (CASO) at 613-747-7800, or email yourcasquestion@casott.on.ca.

"Police have a role to play in observing any potential dangers and will report them immediately to CASO. In matters that involve a child or youth who is in the protest area, CASO will work closely with the OPS to respond to the concern. Child and youth wellbeing and safety is top of mind for CASO," the police release said.

Police say they've made 23 arrests, handed out 1,300 tickets, and have 85 active criminal investigation underway in response to the ongoing occupation. Police have also said they would be enforcing a court-ordered injunction to stop the use of air horns and train horns on the trucks. Those found violating the order could be charged with contempt, and may face up to two years in prison if convicted.

While demonstrators on the ground say they have enough fuel to last for days, efforts continue to bring in more, in defiance of police orders. Protesters have taken to carrying empty jerry cans or containers of water past police, while hiding their actual canisters of fuel in garbage bags or suitcases.

While the protest has been billed as an attempt to end public health measures intended to reduce the spread of COVID-19, organizers made statements Monday night about a desire to form a coalition with opposition parties in the House of Commons to unseat the governing Liberals, which they cannot do.

A proposed "citizens' coalition" made up of members of the protest, the Canadian Senate and the Governor General was part of the "memorandum of understanding" (MOU) organizers had posted on their website prior to the protest beginning. The MOU was taken down Tuesday, with organizers saying it "does not reflect the spirit and intent" of the movement.

Police and the city continue to advise residents to avoid the downtown core, if possible. Several businesses, including the Rideau Centre, remain closed and OC Transpo routes through the core are detoured. The city remains under a state of emergency.