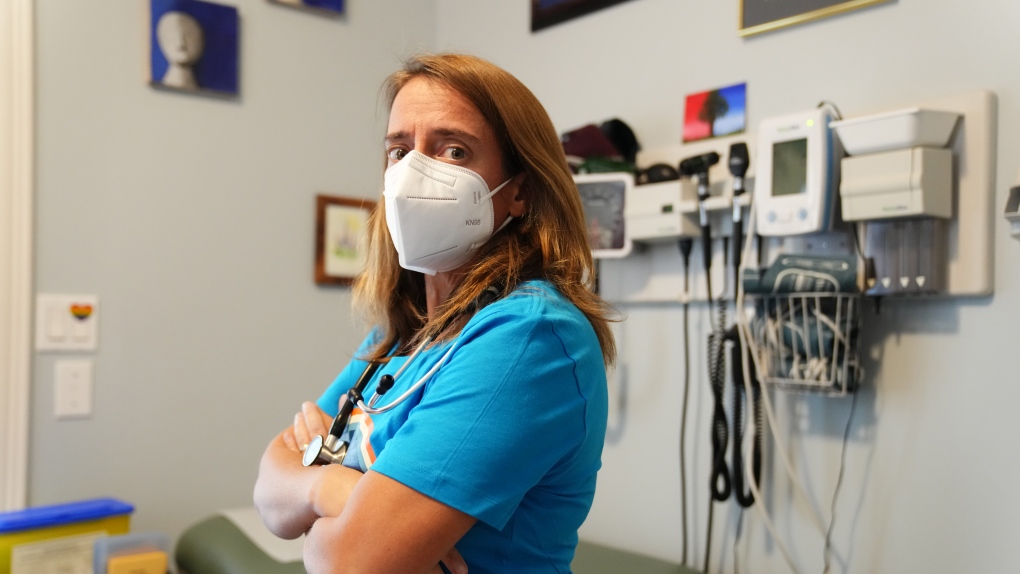 NOTE: Some of the language in this story is offensive.

Ottawa police have issued an arrest warrant for a Windsor, Ont. man after anti-Semitic threats were made against a local family doctor.

Dr. Nili Kaplan-Myrth says she has been the target of anti-Semitic messages and death threats for her work administering COVID-19 vaccines and advocating for public health protections during the pandemic. Threats were amplified after an appearance on TVO’s The Agenda in early September in which she wore a mask while speaking on the air from her Ottawa clinic. Kaplan-Myrth shared a post on her Twitter account shortly after her TV appearance to say her clinic received a phone call containing an anti-Semitic slur.

We received a phone call at my office this morning from a man calling me a “fucking Jew Kike” for speaking on @TheAgenda as a family doctor about the importance of masks and other #COVID19 public health measures. I’ve reported to police as a hate crime. This is NOT civil society.

“The Ottawa police suggested I change my office phone number. Yeah, no,” she said, indicating she reported the call under Bill C-3, which makes it a criminal offence to harass physicians.

In a news release, Ottawa police say a warrant has been issued for Louis Mertzelos, 58, of Windsor, on charges of hate-motivated harassing communications, harassment by repeated communication, mischief, and intimidation of the health service in connection with multiple threats made by phone. Anyone who knows where he is has been asked to call Ottawa police at 613-236-1222.

The charges have not been proven in court.

Kaplan-Myrth said on Twitter Thursday that this is the first time a Canadian is facing a charge under Bill C-3.

“I wasn’t kidding when I said there’s no tolerance for harassment of a physician or anti-Semitic hate (or any form of racism/bigotry). This is about holding hateful, threatening people accountable,” she said.

BREAKING: Court approved an arrest warrant (Ottawa Police to release their statement momentarily). For the first time, a Canadian is charged under our new law against intimidation of HCWS, and as a hate crime. With this, we set a precedent. #EnoughIsEnough #antisemitism #hate

Kaplan-Myrth has been vocal about her support for COVID-19 protections, including masks and vaccination throughout the pandemic. She has run several “Jabapalooza” clinics, which have administered thousands of doses of COVID-19 vaccines to residents.

Speaking to CTV News Ottawa, she says she's thankful there is a law that protects health-care workers but she also says it's important to stand up to hatred wherever it is seen.

“I worry about my colleagues because I know that particularly women and women of colour in journalism, and in other fields, are also subjected to this kind of horrible, horrible harassment, and we should really be charging everybody in every instance and saying we will not tolerate it,” she said.

The threat under investigation by police is not the only one she has received. Kaplan-Myrth also shared an audio recording of a voicemail she said was from a Toronto area code in which a man can be heard yelling and using misogynistic slurs.

Today’s call. Are we going to enforce laws against threats to HCWs? This is what @TheAgenda @anthonyfurey @brianlilley @rupasubramanya and others do when they embolden harassment. Who has our backs? #EnoughIsEnough @JustinTrudeau @fordnation @GovCanHealth @CBCNews @CTVNews @CP24 pic.twitter.com/Fs0y4m7EOZ

Kaplan-Myrth says the harassment has been demoralizing and exhausting.

“We're a team of two women who take care of our 1,400 patients. We are both, you know, in many ways vulnerable as soon as we leave the locked space of our office and we're vulnerable every time we pick up the phone. There's a sense of always worrying that instead of picking up the phone and hearing the voice of one of our wonderful patients, instead we're going to get somebody yelling at us,” she said. “My patients have been very much aware that this is happening and they're horrified. And, you know, I have to keep reassuring them that I'm okay. Like, I am rock solid. Okay.”

Kaplan-Myrth is also running for a school board trustee position with the Ottawa-Carleton District School Board in the municipal election on Oct. 24.

The nation and the city of Memphis struggled to come to grips Saturday with video showing police pummeling Tyre Nichols -- footage that left many unanswered questions about the traffic stop involving the Black motorist and about other law enforcement officers who stood by as he lay motionless on the pavement.

Germany's ambassador to Canada says NATO will not become 'a party to the conflict' in Ukraine, despite several countries announcing they'll answer President Volodymyr Zelenskyy's pleas for tanks, possibly increasing the risk of Russian escalation.

Mass shootings have commanded public attention on a disturbingly frequent basis across the U.S., from a supermarket slaying in Buffalo, New York, to an elementary school tragedy in Uvalde, Texas, to a recent shooting at a California dance hall.

The Taliban on Saturday doubled down on their ban on women's education, reinforcing in a message to private universities that Afghan women are barred from taking university entry exams, according to a spokesman.