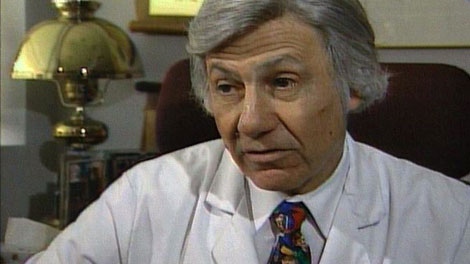 Dr. Norman Barwin is no longer practising and has closed his clinic.

An Ottawa law firm has been inundated with calls about Dr. Norman Barwin, who has been accused of using his own sperm to impregnate at least two women. One family's story yesterday has prompted others to come forward.  It is the kind of story that reverberated around this country but it really resonating with other patients of Dr. Barwin who had undergone artificial insemination years ago and now question if it happened to others, could it have happened to them.

It has been busy day today for the law firm Nelligan, O’Brien, Payne, answering questions about this class action lawsuit.

“There’s been a lot of reaction,” says lawyer Frances ShapiroMunn, “we have been getting calls and we are still getting calls.”

The calls started after an explosive story yesterday involving 26 year old Rebecca Dixon.    Rebecca and her parents, Davina and Daniel, have filed a statement of claim against Doctor Norman Barwin.  The Ottawa fertility expert helped the Dixons conceive Rebecca through artificial insemination, they thought using Daniel's sperm.  A paternity test recently revealed that Daniel is not Rebecca's biological father.  It is believed Barwin is.

“I'm glad we are going public,” Rebecca said in an interview yesterday, “keeping it a secret made it feel very shameful.”

Rebecca found a just a few short months ago through her law firm about another young woman in a similar situation, Kat Palmer, who Barwin has admitted to fathering.

“I never thought it would be the doctor who was my sperm donor,” Palmer said in an interview through Skype.

Lawyer Frances ShapiroMunn says they have no idea how many other cases are out there but believe there could be many given the fact that both Kat and Rebecca are now in the mid-20’s and that Barwin stopped practicing just two years ago.

“A lot of people are concerned about their own history with Dr. Barwin,” ShapiroMunn said, “patients who may have seen him, which is good because we want to hear from as many of those people as we can.”

One man who called CTV Ottawa has two children conceived through artificial insemination with Barwin's help.  He recalls photos that Barwin had on his wall at his fertility clinic that he jokingly referring to as “his babies.”  The man says he now finds that alarming.

“It certainly brings forward a lot of complicated emotions for everyone involved,” she added.

If there is one silver lining, it is that Rebecca is thrilled to have a sister.

“I'm overjoyed I have a sibling,” she said, “and possibly more out there.”

As for criminal charges, Ottawa Police won't confirm or deny whether an investigation is underway.  Rebecca Dixon has said she is not interested in punishment.

Former patients of Dr. Barwin’s and/or their children who wish more information are asked to contact Nelligan O’Brien Payne at 613-238-8080 or email Robyn Beaulne at robyn.beaulne@nelligan.ca