During her presentation to council, Dr. Etches pointed to a specific case in which one person, who developed symptoms of COVID-19 while at a cottage with ten other people, ended up spreading the virus, leading to dozens of future infections.

"You have a group of 10 friends who were all attending a party at a cottage. There was one person who developed cold-like symptoms while at the cottage party and then tested positive on their return home," Dr. Etches said. "Subsequently, seven of those friends tested positive for COVID-19."

The slide, shared by Dr. Etches, shows that the friends who went home after the party who later tested positive developed symptoms four to seven days after the party, and then spread the virus to others.

"Within 9 days one person with symptoms became 40 confirmed people who tested positive," she said. "These friends went back to their own homes and the infection spread to people who were in their homes, sometimes the vulnerable population, people who needed attend emergency rooms for care."

Some of the people in the homes who later became infected also went out to work or other places, spreading the virus further.

"These people also then attended work and retail locations while they were communicable," Dr. Etches said. "There were situations that included child care, two situations where we did then have to close child care and we saw spread within the child care settings."

However, she notes there was no spread within any of the retail locations that communicable individuals visited.

"This is to underline that none of these people expected that their minor cold symptoms were COVID. If there was protection like physical distancing, if people were wearing masks, then that would limit the transmission of COVID-19." 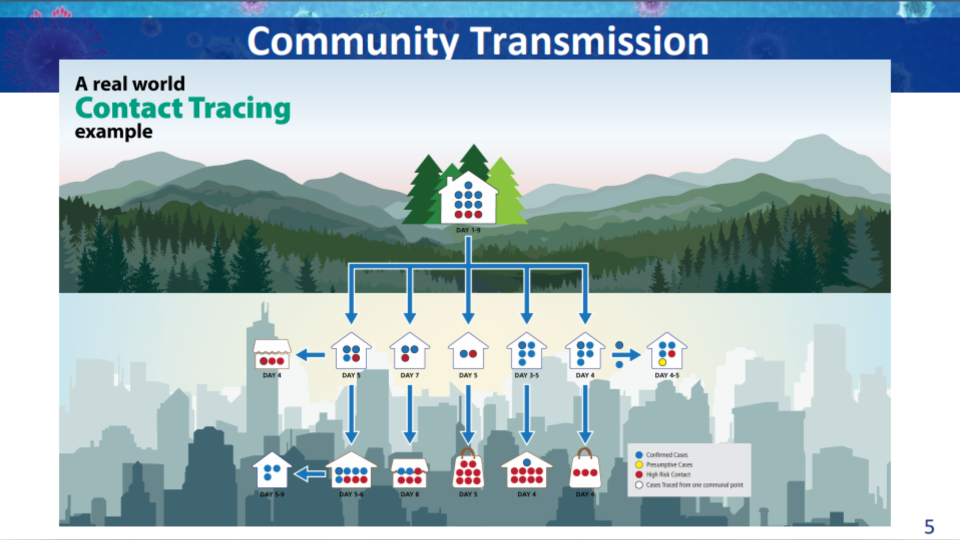 On Wednesday, Ontario Premier Doug Ford urged local mayors to roll back gathering limits if they are concerned about COVID-19 cases in their municipalities.

Ford's comments came after he identified Ottawa, Toronto and Brampton as COVID-19 "hot spots" on Tuesday.

Speaking to reporters on Wednesday after the city council meeting, Mayor Jim Watson said he had no plans to roll any measures back right now.

"We would take our direction from our medical officer of health," Watson said. "If the province comes back with any regulations to roll back the decisions they've taken, obviously we'd adhere to those. To the best of my knowledge, we have no plans to roll back any of the services and operations at this point."

Dr. Etches said it's not businesses that are contributing to the rise in cases, but social gatherings.

"What needs to change is the size of social gatherings indoors. There's no business, no workplace that can make a difference there, that’s each of us in our own behaviour. I think that's where we need to target more protective measures."

The province of British Columbia recently announced it would shut down nightclubs and bars, and roll back opening hours for bars to help contain the spread of COVID-19.

In Toronto, mayor John Tory announced he would not hesitate to cancel Hallowe'en if it deemed too risky.

With files from CP24's Chris Fox.