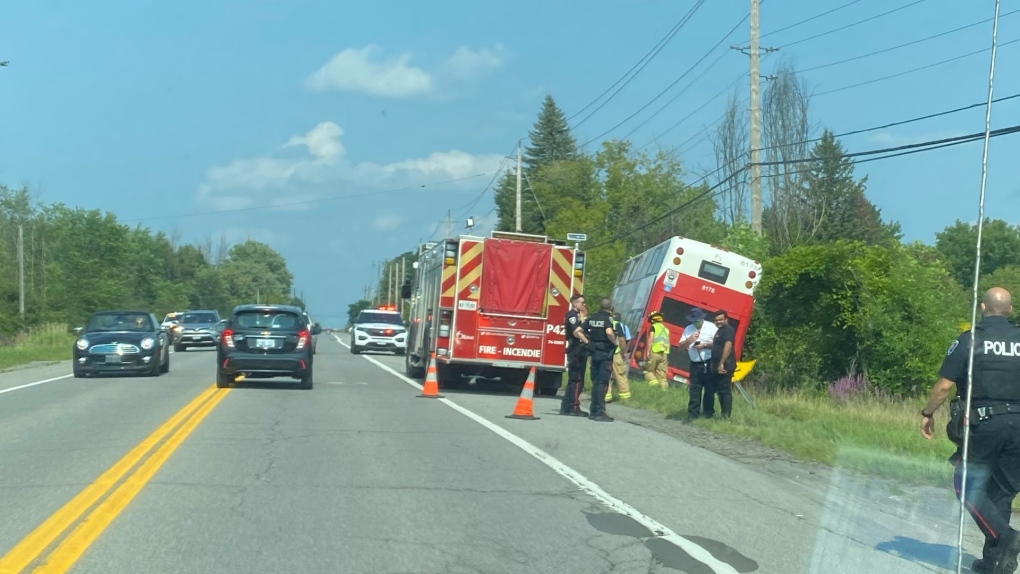 An OC Transpo double-decker ended up in a ditch Monday, Aug. 9, 2021. No one was reported hurt, Ottawa police said. (Photo courtesy of Christopher Peterson.)

OTTAWA -- OC Transpo is taking 19 double-decker buses off the road temporarily after one bus ended up in a ditch in the city's west end on Monday.

The double-decker left the road along Carling Avenue near Herzberg Road Monday afternoon for reasons that remain under investigation and came to rest at an angle. There were two passengers on board the bus at the time, OC Transpo confirmed. Neither the passengers nor the bus driver were injured.

In a statement Tuesday afternoon, Transportation Services General Manager John Manconi said 19 buses of the same model would be removed from service pending an investigation.

"As part of the ongoing investigation, OC Transpo has proactively removed all 19 double-deckers of the same model involved in this incident from service and are working with the manufacturer to determine the cause," he wrote. "This step has been taken as a proactive measure as OC Transpo’s top priority continues to be the safety and security of our customers and our staff."

Manconi said the removal of these 19 buses would not affect regular service, nor would it affect the R1 bus service that has been called in to replace the Confederation Line LRT, which remains offline due to a minor derailment earlier this week.