OTTAWA -- Face masks are now mandatory in indoor public spaces across the capital.

"Increasing scientific evidence supports wearing a mask when in enclosed public spaces as an important measure in reducing COVID-19 transmission, while the risk of rising rates of infection continues," Dr. Etches said.

The medical officer of health has the power under the Health Protection and Promotion Act to introduce a mandatory face covering policy.

"Implementation of the policy should be enacted and enforced in good faith and should be primarily used as a means to educate people on Mask use in public spaces," the order for Ottawa says.

The full order for Ottawa can be read at the end of this article.

The order reads as follows:

Under the order, "enclosed public spaces" include but are not limited to:

Schools, childcare centres and day camps are not considered an enclosed public space under this order.

“Operator” means: the person who controls, governs, directs, or is responsible for the activity carried on within the Enclosed Public Space and includes the person who is actually in charge at any particular time.

“Mask” means: a cloth (non-medical) mask, medical mask or other face coverings, (e.g., bandana, a scarf or cloth), for filtering respiratory droplets that securely covers the nose, mouth, and chin and is in contact with the surrounding face without gapping.

Face shields do not qualify as "masks" under the order, but those who are exempt from wearing masks may choose to wear a face shield.

Some exemptions for the order will be in effect.

Under the order, the following people will be exempt from having to wear a mask:

The order will be enforced in "good faith" and will focus primarily on education.

No person will be required to provide proof for their reason for exemptions outlined above, the order says.

People will be allowed to temporarily remove their masks if they are receiving services, engaging in an athletic or fitness activity including water-based activities, consuming food or drink, or for any emergency purposes.

On Friday, Mayor Jim Watson and Ottawa Board of Health Chair Keith Egli announced Ottawa would join other Ontario municipalities and "mandate the use of cloth masks in many indoor public spaces."

In a statement, Watson said, "in speaking with members of our business community, we've heard from business owners that they are in favour of mandating the wearing of cloth masks in indoor public spaces."

Council will vote July 15 on a motion to institute a by-law ensuring that residents of Ottawa wear a cloth mask that "covers their nose, mouth and chin."

The City of Ottawa says Dr. Etches' order will remain in effect until the by-law is approved. The by-law is expected to have similar, if not identical requirements to the public health order.

"While it doesn't have all the bells and whistles and flexibility of a by-law, which is why we want to have a bylaw at the end of the day, it will carry the city through until (July) 15," Board of Health Chair Councillor Keith Egli told CTV News over the weekend.

“This is about education, collaboration, cooperation, that’s what we’re looking for,” Egli said Monday. “We’re looking for people to do the right thing and we’re going to do our best to make that easy for you.”

The by-law, once in effect, will be temporary and will be regularly reviewed, Dr. Etches said.

Other regions in eastern Ontario

The mask policy will also come into effect at 12:01 a.m. Tuesday in municipalities in the Eastern Ontario Health Unit (EOHU) and the Leeds, Grenville and Lanark District Health Unit (LGLDHU).

The EOHU says there will be an enforcement grace period of one week, until 12:01 a.m. July 14.

“Wearing a mask or face covering in indoor public spaces accessed by the public adds another level of protection against the spread of COVID-19” said Dr. Paul Roumeliotis, Medical Officer of Health at the EOHU. “There is scientific evidence that wearing a mask is an effective way of preventing the spread of COVID-19, and it’s another measure we are adding to our arsenal as we get ready for stage 3 of reopening and back-to-school in the fall.”

The LGLDHU says its policy will be in place until the end of September, at which point it will be reviewed.

"The Instruction comes into effect as of Tuesday, July 7, 2020 at 12:01am and will be reviewed on September 30, 2020," the LGLDHU says. "The LGLDHU, to support implementation of this Instruction, will provide information and consultation to operators of enclosed indoor spaces. This directive is to be primarily used to educate people on facial covering/mask use in enclosed public spaces where 2-metre physical distancing cannot always be maintained."

The Renfrew County and District Health Unit says the directive will come into force next week.

“In Renfrew County and District, this directive will require that masks are worn in enclosed public spaces. The details of the local directive are in development and will come into effect next week. RCDHU’s first step for implementation of this directive is a gradual education process to be further assessed going forward. This directive is to be primarily used as a means to educate people on mask use in premises, especially where 2-metre physical distancing cannot be maintained.”

On June 26, the City of Kingston announced face masks would be mandatory in all indoor public settings, including retail stores, restaurants, shopping malls, grocery stores, places of worship and personal service settings.

A recent Ottawa Public Health survey found 71 per cent of residents wore a mask in indoor public spaces either "most of the time" or "always" in the previous seven days.

The Ottawa Board of Trade supports the move to mandatory use of masks in indoor spaces.

"It is the right and smart thing to do for our community health and our economy," said Sueling Ching, President and CEO of the Ottawa Board of Trade.

"Many businesses have not survived the imposed restrictions and we must do everything possible to safely reopen and keep open our economy in the COVID environment. The use of masks is a key tactic that other jurisdictions have effectively implemented, and we can learn from their experience."

On June 15, OC Transpo made face masks mandatory for riders on buses, the O-Train, Para Transpo vehicles and in stations.

Members of the public are split on the issue, though some who spoke to CTV News are in favour of making masks mandatory.

“I think if it’s going to reduce the spread, I think if masks can give any type of reduction to the cause I don’t mind wearing a mask, I think it’s the least we can do to help the city get out of this,” said Sarah Fraser. “I’m noticing more and more people are actually wearing them so that’s good to see.”

“I’m all for it if it can prevent spreading more COVID-19 around,” said Joannie Campagne, adding that she hopes those who are against wearing one will change their minds or their plans.

“If people are going to be close together fine, put a mask but to be mandatory I don’t know it’s hard to say,” said Myrthee Thenor-Louis.

“Right now Ottawa is not doing too badly but to keep doing good I think we gotta wear the mask,” said Jacques Chenier.

The City of Kingston announced the mandatory face mask policy on June 26. The story has been corrected with the correct date. 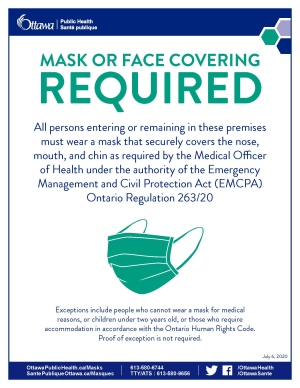