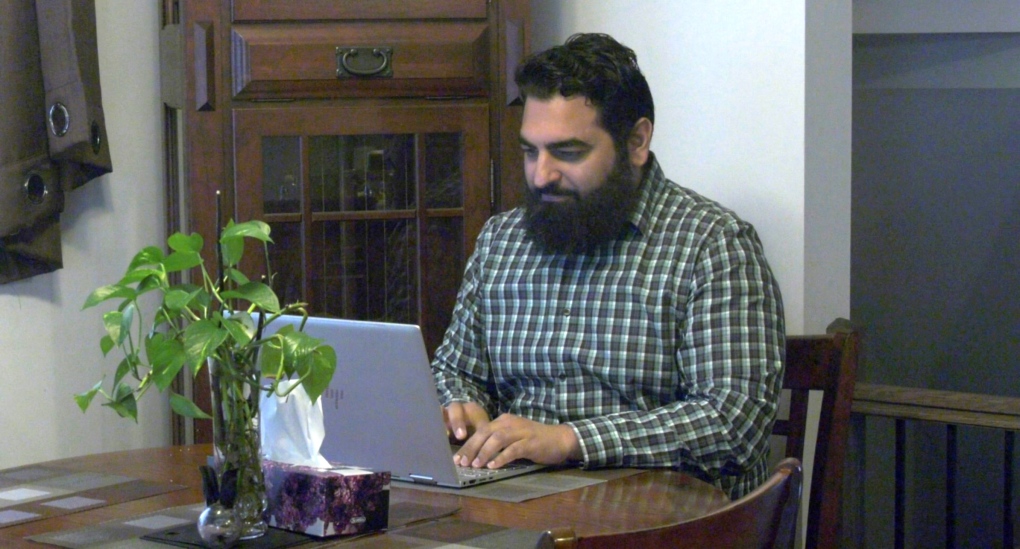 OTTAWA -- Asif Hameed is one of the many Ontarians who spent hours Monday morning trying to book a COVID-19 vaccination through the provincial portal.

“At first I logged in around two or three minutes after 8:00 a.m. The provincial website was down as soon as you put in the postal code,” Hameed said.

Hameed lives in Ottawa’s K1T hotspot. He spent two-and-half hours trying to get his shot.

“When I looked at my phone and the first thing was your number 117,300 and so and so in line, it’s a little disheartening and it makes you think that maybe putting it out there like it’s the Hunger Games isn’t the best way to do it,” Hameed said.

Jeff Pelletier is a student in Ottawa’s K1V postal code. He says he waited an hour online, before running into problems immediately.

“The postal code that corresponds with my OHIP card is not actually the same place where I live right now,” Pelletier said.

Pelletier said he, and many other students, are facing a similar issue: living in a provincial hotspot but without the proof needed to book an appointment online.

It took another hour on the telephone before Pelletier was able to get through to an operator to clarify his situation.

“He was able to book me in for an appointment this Friday and just reassured me the issues with my postal code were okay and there shouldn’t be any issues after that,” he said.

Ottawa residents living in postal codes beginning with K1T, K1V, and K2V are among the 114 hotspots designated by the province that will see a 50 per cent increase in vaccine supply.

Dr. Isaac Bogoch, a member of Ontario’s Vaccination Task Force, says getting vaccines to the areas that are hardest hit is a critical part of the vaccination rollout.

“Only part of the puzzle is putting more vaccines into those hotspot neighbourhoods but an extremely important piece is ensuring you actually get those into the right arms in those neighbourhoods,” Dr. Bogoch said.

In an effort to reach as many people as possible in those neighbourhoods, the city is launching a new vaccination clinic at the Infinity Convention Centre; centrally located between the K1V and K1T postal codes.

The centre, which is taking appointments through the Ontario portal, is described by city General Manager Anthony Di Monte as something in between a mass vaccination site and a pop up clinic.

“We’re going to be very flexible and I think that’s the key to our objective here … We want to make it as easy as possible for people to get vaccinated,” Di Monte said.

Di Monte couldn’t say when the site would begin vaccinations, but says if vaccination rates at the clinic are successful, similar sites could be added in the future.

“What’s important is, for these higher risk communities, we want to make sure there’s no barriers for them. So, if travel is a barrier, we want to put these sites into their areas,” Di Monte said.

There has been some debate about whether K2V, a forward sortation area that includes parts of Kanata and Stittsville, should have been designated a hotspot.

“I think there’s still a lot of confusion, quite frankly over why that neighbourhood was chosen, but at the end of the day the province is sticking to those three postal codes and we have to follow the direction of the province,” Ottawa Mayor Jim Watson said.

It means many in the 21 communities designated a high-risk by Ottawa Public Health will not be eligible to book a vaccine via the provincial portal.

Watson says the city hopes to increase vaccination in those communities in the next week or two.

“The bottom line, it boils down to enough doses. We, at this point, don’t have enough doses to go and do all 21 high priority neighbourhoods simultaneously,” Watson said.