An Ottawa jury heard stories today of courage and steely resolve from a 101-year -old war vet who refused to give in. In a police interview Ernest Côté calmly describes how he survived a violent home invasion.

Ernest Côté would have been the key witness for the Crown in the trial against Ian Bush, accused of attempted murder, robbery and forcible confinement. But Coté died just shy of his 102 birthday. The police interview, done a couple of days after the home invasion, is the next best thing to hearing from the man himself.

In his tidy condo on Durham Private an unimaginable attack occurred against a 101-year-old decorated veteran of the Normandy invasion.

Court today saw photos of the plastic bag that was wrapped tightly around Ernest Cote's head, the duct tape that secured it and the phone Cote used to call 911 for help once he did the impossible: wiggled free of the bindings that tied his hands and cut through the plastic that nearly snuffed out his life.

“He covered my face,” Coté is heard telling the dispatcher with 911, “and if I had not found a way to untie my wrists, I would have smothered because he covered my face with a bag.”

Court heard just the beginning today of a two hour long police interview, mostly in French, in which Côté describes in detail exactly what transpired inside his condo on December 18, 2014.

Earlier in the day, court heard from the manager of the condo where Ernest Côté lived. He saw police in Côté’s apartment, saw Côté with a bag over his head and asked, “Is this a joke?” to which Côté replied, “No, Maurice, I've just been attacked.”

Maurice Drouin helped police secure surveillance video from the condo complex which was released to the media days after the violent attack on Côté. It shows a man being buzzed into the building then calmly walking the hallway on the second floor where Côté lived. It's this footage that the Crown says led to the arrest of Ian Bush after his family recognized him in the video. 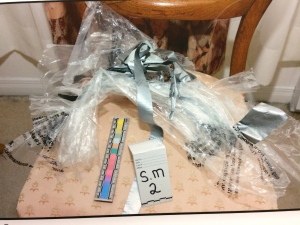