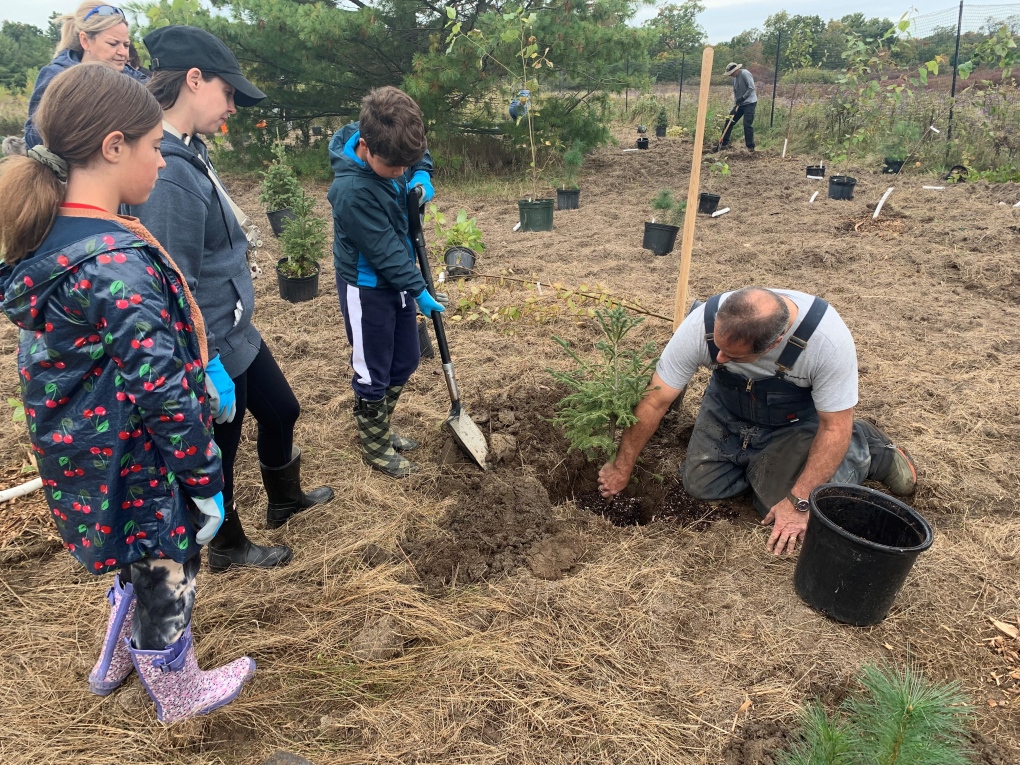 Volunteers and community members planted hundreds of trees at Lemoine Point in Kingston, Ont. on Saturday, one of the city’s most popular walking trails.

It is part of a long-term plan to support the important conservation area.

As their shovel digs down, it is a new experience for 10-year-old Mia and her 11-year-old cousin Tiago, who are planting their very first tree.

"The dirt is really like clay, so you really got to step on the shovel and really dig it out," explains Mia Rodrigues.

They have joined the more than 50 community members, pulling up their sleeves, and the dirt, to get more than 350 trees in the ground.

"I think its fun and it’s helpful," Mia says. "It’s great to see everybody out here and stuff."

The fall event has happened almost every year for two decades, though a partnership with the Cataraqui Conservation Authority and the Friends of Lemoine Point.

White pine, white spruce, and red maples are just some of the trees being planted, and each one is native to the area, which helps to support the biodiversity of the park, says Sandra McCance, who is a coordinator with Friends of Lemoine Point.

"Unfortunately there are a number of pests and diseases that have taken its toll on the forest," she says. "So there is a need to replace trees and regenerate the forest."

One of Kingston’s most popular walking routes, it holds 11 kilometres of trails that people can walk and bike.

It’s also home to deer, wild turkeys, and owls, among other species.

Rick Knapton, who is the forestry coordinator with the Cataraqui Conservation Authority, says it has to help to extend the forest.

"Once the trees are big enough height, and the trees can fend for themselves, then the deer can come back in here and cohabitate in here with other animals," he explains.

Keeping the park alive and flourishing, is a big draw for volunteer Gerard Bondt.

McCance says the trees have been purchased and raised by the volunteer group with the help of donations, and memberships.

"We only nurture and grow native species, because that’s what’s important here in this part of the country," she explains.