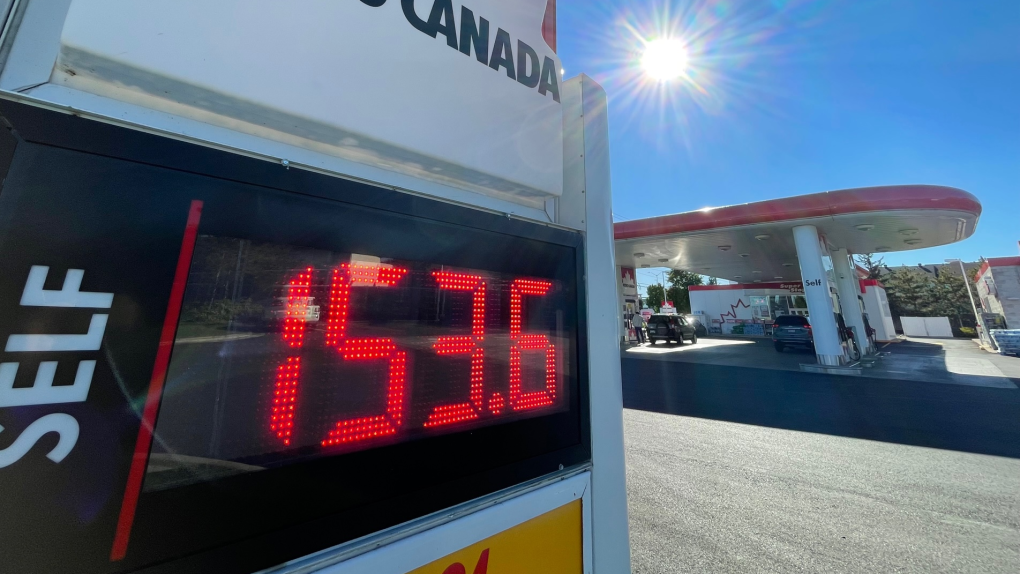 Ottawa motorists paid $1.53 to fill up the gas tank on Thursday. Prices are set to rise another three cents a litre on Friday. (Peter Szperling/CTV News Ottawa)

It will cost you more to fill up the gas tank in Ottawa heading into the weekend.

Gas prices increased five cents a litre at Ottawa stations on Thursday to an average of $1.54 a litre.

Canadians for Affordable Energy president Dan McTeague predicts gas prices will rise another three cents a litre on Friday to approximately $1.57 a litre.

“There's a chance we could see prices moving up and we're going to have to watch what happens to Hurricane Ian," McTeague told CP24.com.

"A lot of people saying it won’t affect assets that create energy, oil, gasoline, oil in the United States, but there's a pipeline that goes to there called a Colonial Pipeline. I don't think it'd be flooded, but if it does it may shut down temporarily."

McTeague says the impact of colder weather on the demand for more energy resources and the weakness of the Canadian dollar is bringing up prices at the pumps.

Ottawa gas prices hit a record 215.9 cents a litre on June 11, but have been below $2 a litre for most of the summer. The Ontario government cut the gas tax rate from 14.7 cents per litre to nine cents a litre on July 1 for six months.

According to Ottawagasprices.com, gas was selling for an average of $1.46 a litre in Ottawa on Wednesday – that's the lowest level since February.

McTeague tells CP24.com fuel prices right now are "as good as it gets."

“Going forward, slowly in the month of October and a little faster in November, we're going to see prices rise. Especially on the diesel side, on the jet fuel side, on the natural gas side. On the home heating side, on the propane side. And yes that will impact gasoline,” he tells CP24.com.

When a B.C. metal artist was asked to create a giant sculpture with Elon Musk's head on the body of a goat riding a rocket he had no idea who would want to create such a thing or why.

San Francisco will allow police to deploy robots that kill

Supervisors in San Francisco voted Tuesday to give city police the ability to use potentially lethal, remote-controlled robots in emergency situations -- following an emotionally charged debate that reflected divisions on the politically liberal board over support for law enforcement.

Thousands asked for it while he was leader and now Jason Kenney has done it, announcing his resignation as a member of the Alberta legislature on social media Tuesday.