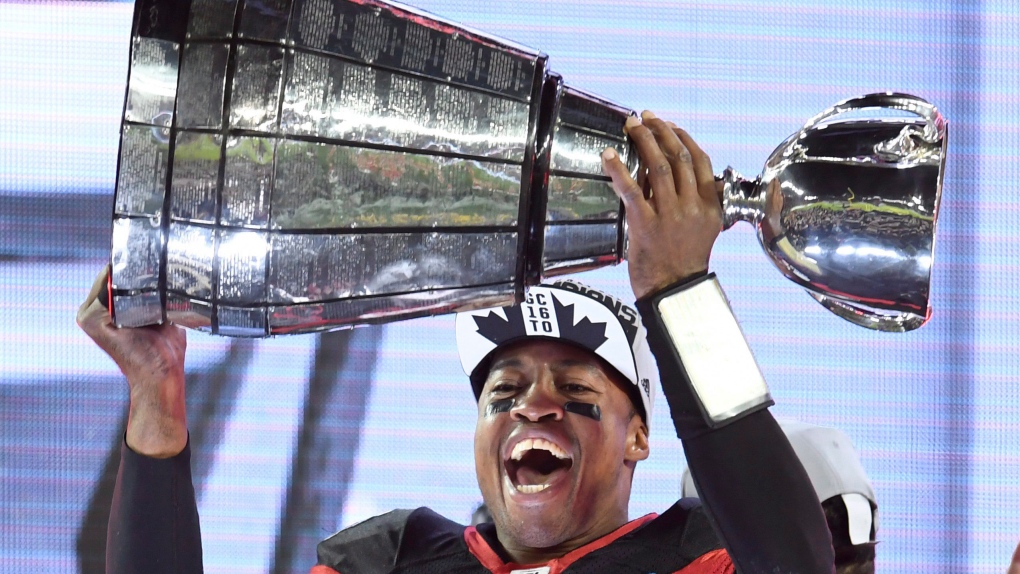 Ottawa Redblacks' Henry Burris holds up the Grey Cup, celebrating his team's win over the Calgary Stampeders in Toronto, on Sunday, Nov. 27, 2016. (THE CANADIAN PRESS/Frank Gunn)

OTTAWA -- CTV News can confirm Former Ottawa REDBLACKS quarterback and Grey Cup champion Henry Burris is set to join the Chicago Bears coaching staff during training camp, thanks to an NFL program that promotes diversity in the league.

Burris played quarterback for the Bears in 2002, but is best known for his time in the CFL, winning two Grey Cups with the Calgary Stampeders and one with the Ottawa REDBLACKS.

As first reported by Adam Jahns of The Athletic, the two-time Grey Cup MVP is joining the Bears coaching team through the NFL's Bill Walsh Diversity Coaching Fellowship.

"People have asked me if I ever wanted to coach and I can say, in the back of my mind, I've always had this dream about coaching and being involved in the game and I always said, the one place, if I did coach, it would have to be the NFL," he said. "Doing an internship with the Chicago Bears, my old team I played with in 2002 and '03, to be back here, it's something."

The program has been in the NFL for more than 30 years. All 32 clubs participate each year, the NFL says.

Burris says the Bill Walsh Diversity Fellowship is an important program for the league.

"They're trying to create more diversity in the NFL because it's definitely been made public knowledge just about the lack of representation, more so on the offensive side when it comes to quarterback coaches, offensive coordinators and head coaches," he said. "When you look at the NFL, it's over 70 per cent Blacks that are involved in this league [...] When you look at that locker room, I think it's important for those players to see that there's somebody who looks exactly like them and can relate to them in order to build that type of winning culture that not only creates better players but better men, as well."

Burris was most recently inducted into the CFL Hall of Fame on his first year of eligibility. He is the first member of the REDBLACKS to enter the hall of fame.