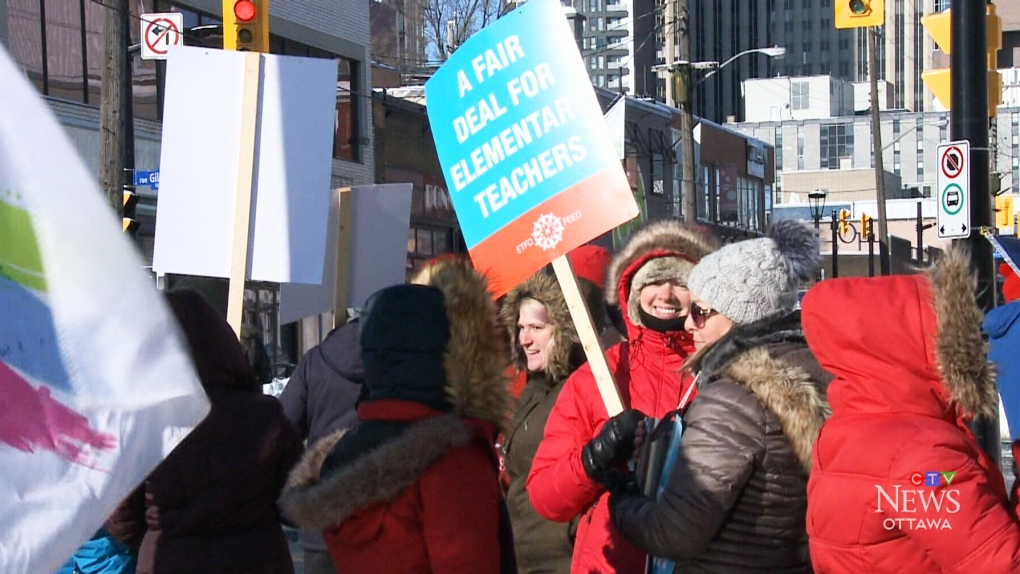 OTTAWA -- Rotating strikes by the Elementary Teachers’ Federation of Ontario will continue next week and a pair of eastern Ontario public school boards will be affected.

If no deal is reached with the government before Jan. 29, the UCDSB says there will be no classes or transportation for any Kindergarten to Grade 8 students that day, including Grade 7 and 8 students who attend a secondary school. Classes and transportation for Grades 9 to 12 will not be impacted and all classes, exams, and activities will continue as normal.

The Limestone District Board issued a similar statement, saying all elementary and intermediate schools will be closed Wednesday and students from Kindergarten to Grade 8 should not report to school. All secondary schools will remain open during exams.

“ETFO is very disappointed that Ford’s Education Minister Lecce has not come back to the bargaining table to negotiate key issues affecting students, student learning and educators,” said ETFO President Sam Hammond in the union’s latest press release. “It is now 36 days since ETFO’s last bargaining session on December 19, 2019.”

The Greater Essex County and Near North boards will also be affected by the one-day walkout on Wednesday.

The job actions have been ongoing since Monday, when ETFO began its rotating strikes in Ottawa and Toronto. The union continues to argue their escalating strike action is not about wages—though they are opposed to a legislated cap of 1% on yearly salary increases, and believe it should be negotiated at the bargaining table.

“Minister Lecce is wrong when he says our strike action is about money,” Hammond is quoted as saying. “Ask any ETFO educator and they will tell you that lack of supports for children with special needs, large class sizes and the violent incidents occurring in classrooms due to lack of supports for students with unique learning needs are the reasons they are willing to go on strike.”

Speaking to reporters Friday, Premier Doug Ford said he supports teachers, but his patience is running thin with their unions.

“There’s only so long my patience can last with the head of the unions,” he said. “Stay tuned.”

Ford didn’t elaborate, but later clarified that he’s not considering back-to-work legislation “at this point.”