Ottawa Police Chief Peter Sloly says protesters are countering any police actions to bring an end to the “Freedom Convoy” demonstration that has occupied the downtown core of the nation’s capital for 11 days, with no signs of ending.

Speaking on CTV News at Six Monday evening, Sloly said demonstrators are adapting quickly to any enforcement efforts, such as disallowing fuel containers into the downtown core.

"What was happening during the course of the day is some of the protesters were deliberately filling jerry cans with water, literally drinking out of them to show the police that they weren't gasoline," Sloly said. "Meanwhile, they were carrying gasoline in other containers that would have been carrying water."

Police made the announcement Sunday that fuel would not be allowed into the protest “red zone” and that anyone bringing supplies to the protest could face arrest. It came hours before police seized thousands of litres of fuel from a staging area on Coventry Road.

Sloly said the countermeasures speak to the "sophistication and commitment" of the operation, as demonstrators appear able to pivot en masse in reaction to police efforts.

The police chief also said officers were swarmed at one point during an attempted arrest.

"Our officers were surrounded by over 100 demonstrators," he said. "A near-riot broke out within minutes of being on the air here, to do what we've been saying we doing: enforcing and reducing the fuel supply, interdicting the gasoline going in there—at great risk in every single encounter."

Speaking to reporters later in the evening, Deputy Police Chief Steve Bell said an investigation into the incident is underway, an arrest was made and charges are pending.

Sloly pushed back against comparisons to other cities that have had similar protests, such as Toronto and Quebec City.

"Deputy minister Mario Di Tommaso, on a call today with the three levels of government said, 'Hey, Peter, what do you think about using heavy tow trucks to remove the trucks that are in your town? Toronto did it. They did it on the weekend. They had one tow truck go out and confront six trucks and the six trucks left.' I said, 'Well, I have two heavy two trucks here from the city and I had a thousand trucks on Saturday and last Saturday, I had 3,000 trucks,'" Sloly said. "That's like comparing Pluto the Sun, in terms of the scale and the complexity and the violence that this city has experienced, compared to other jurisdictions. This is a completely different beast that we're dealing with here in Ottawa."

Police estimate between 400 and 500 trucks remain in the downtown core. Sloly has asked other levels of government for 1,800 additional police officers and civilian staff. For comparison, the full size of the Ottawa Police Service is 2,100 members.

The City of Ottawa has asked the Chief Justice of Ontario to increase the value of fines being issued to protesters with the "Freedom Convoy" demonstration that has occupied the downtown core for 11 days and counting.

In opening remarks to a special meeting of city council, Mayor Jim Watson said the penalties for some of the demonstration's tactics would be increased.

"Chief bylaw officer Roger Chapman has confirmed that the Chief Justice of Ontario is supportive of our request and is committed to enacting these higher fines as soon as possible," Watson said.

Sloly said so far, the RCMP has sent 257 officers and the OPP has sent an average of 100 additional officers per day over the last week.

"We are asking for more. It is not enough. It is not sustainable," Sloly said, as he thanked RCMP Commissioner Brenda Lucki and OPP Commissioner Thomas Carrique for their support. Sloly also expressed his gratefulness for support from municipal forces from eastern Ontario, the GTHA and the Niagara Region.

"This unacceptable and unlawful demonstration must end," Sloly said.

On Saturday, Ottawa's police chief admitted the force doesn't have enough resources to address the situation.

According to a letter to Prime Minister Justin Trudeau and Public Safety Minister Marco Mendicino, the city is seeking 1,000 regular officers, 600 public order officers, 100 investigative officers, 100 civilian staff and "all supporting resources." The same request was made in a letter to Ontario Premier Doug Ford and Solicitor General Sylvia Jones.

Watson earlier called on the Prime Minister Justin Trudeau's government to appoint a mediator in an effort to end the 'Freedom Convoy' occupation in the city's downtown.

He said he has suggested to federal ministers that a mediator could be "an honest broker on both sides to try to find some common ground, if that's possible."

"Someone of great stature in our community and the country who can actually open doors and bring some peace and calm to the situation," Watson told CTV Morning Live. "That’s one option that I think the federal government should pursue, because right now we’re at a complete standoff."

Watson's suggestion comes ahead of a special council meeting Monday afternoon, with the ongoing demonstration entering an 11th day. You can watch the meeting here starting at 1 p.m.

The meeting comes as officials hope increased enforcement by police will lead to a turning point in efforts to end the occupation.

Police moved to cut off the supply of gasoline, propane and other "material supports" to the demonstrators on Sunday, seizing more than 3,000 litres of fuel at the Ottawa Baseball Stadium and threatening to arrest anyone bringing supplies into the downtown area.

Seven people were arrested during enforcement initiatives targeting the demonstration on Sunday, while more than 100 tickets were issued for Highway Traffic Act offences.

On Sunday, Watson declared a state of emergency due to the ongoing demonstration, giving the city the "administrative tool" to cut red tape in the procurement policy. 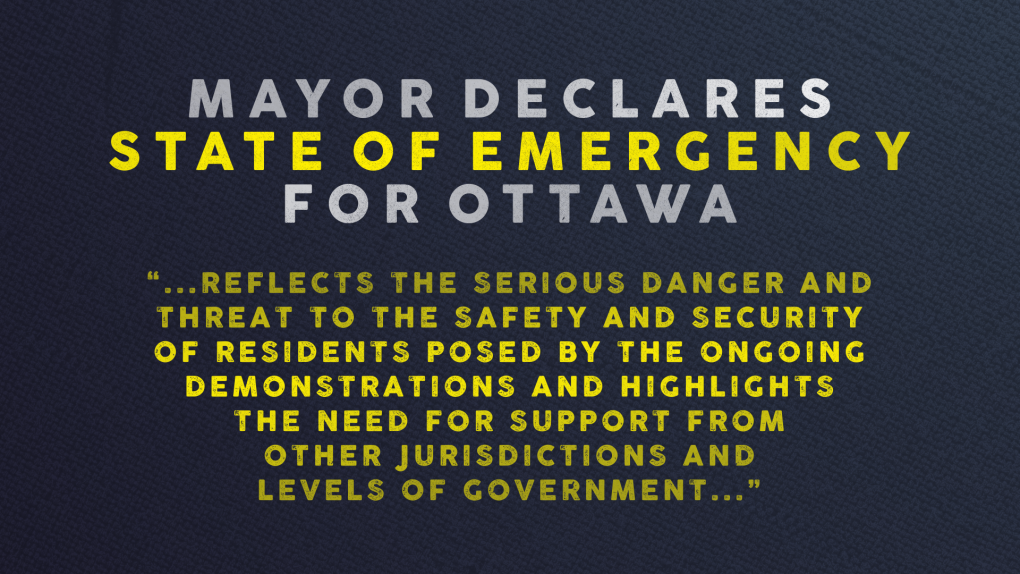 Mayor Jim Watson declared a state of emergency in his city on Sunday, Feb. 6, 2022 in the face of ongoing protests that have overwhelmed local resources shortly before police moved to choke the convoy's supply chain.

"They have to be much more aggressive in terms of these fines. Someone is going to get killed or seriously injured because of the irresponsible behaviour of some of these people who are honking their horns and destroying the fabric of neighbourhoods," Watson said.

“At the end of the day, it’s going to be a combination of enforcement, to a certain degree, as well as compromise and cutting off the supply lines of these people," he said. "We can’t allow them to have barbecues and turn this into a real carnival. It’s an absolute disgrace."

The Rideau Centre, Ottawa City Hall and the Rink of Dreams, two public library branches and two COVID-19 vaccination clinics remain closed due to the ongoing road closures and traffic gridlock in the downtown core.

Cadillac Fairview, which owns the Rideau Centre, said in a statement that authorities "cannot provide any assurances that it is safe" to open the mall.

At the council meeting, Coun. Catherine McKenney expects councillors to move several motions during the special council meeting. McKenney will table a motion asking the federal government to take over policing of the Parliamentary Precinct.

"I need to see the federal government assume operation control for the Parliamentary Precinct," said McKenney during an interview on Newstalk 580 CFRA. "We can request that; they can't just move in but we can make that formal request and that would then free up all of our local police to turn their attention into the residential areas that are under occupation in the city."

INJUNCTION GRANTED AGAINST USE OF HORNS

A 10-day injunction against the constant honking as part of the protest has been granted by a judge.

A $9.8 million class-action proposed lawsuit was filed by local lawyer Paul Champ on behalf of residents in Ottawa affected by the ongoing demonstration.

Lead plaintiff in the class action suit, Zexi Li, told CTV News Channel on Monday that living in the downtown core has been "unbearable" these past 11 days.

“There are people who have had to evacuate their homes because they can't stand the noise because it is literally, quite literally, torturous to us,” Li said. “And we are not going to stay quiet anymore because people need to understand the real damage this is doing to real people.”

Letter to PM Trudeau and Mi... by CTV Ottawa

British Prime Minister Boris Johnson resigned Thursday, acknowledging that it was 'clearly the will' of his party that he should go. He stepped down immediately as leader of his Conservative Party but plans to remain as prime minister while the leadership contest is held.

Canada will keep ArriveCan for its data on COVID-19-positive travellers: sources

A staggering 71 million more people around the world are experiencing poverty as a result of soaring food and energy prices that climbed in the weeks following Russia's invasion of Ukraine, the United Nations Development Program said in a report Thursday.