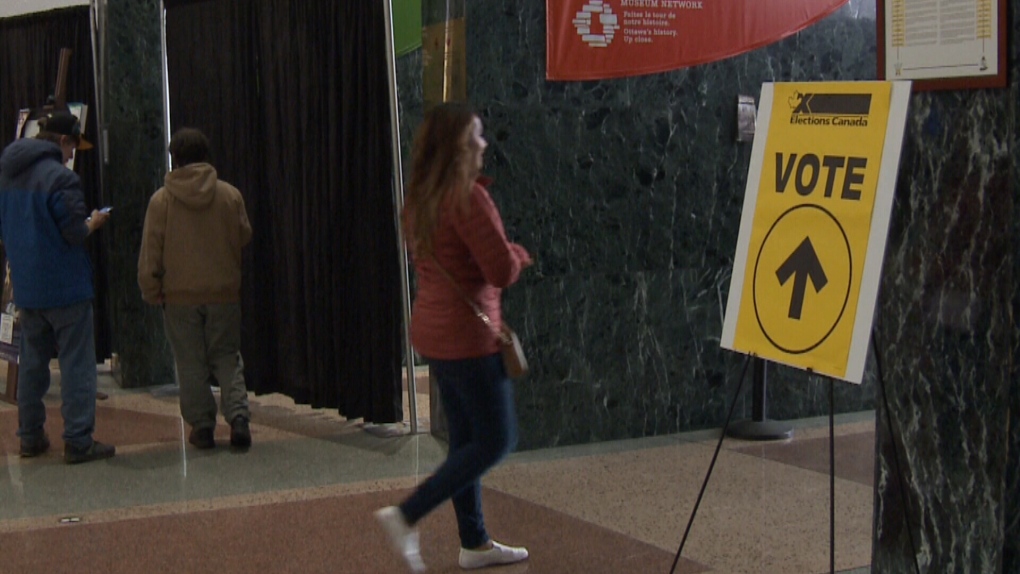 It seems the election was on the minds of many this long Thanksgiving weekend and not just the political leaders. Advance poll numbers are way up; clearly voters were taking advantage of this opportunity to cast their ballots early.More than two million people voted in just the first two days of the advance polls.  Thanksgiving Monday marked the final day with polls open until 9 p.m.

That's a twenty-five percent increase over the previous election in terms of advance polls.  What that says about the final vote, we'll know in a week.

But some voters speculate a lot more Canadians are taking notice of this campaign and making sure their voice is heard.

The “vote” sign led the way, and people followed.  There was a steady stream of voters at the Greenboro Community centre in Ottawa's south end. Veronica Vicencio and her young daughter were among them, “Challenging times for sure,” she said, “here and everywhere else.”

Challenging times that some voters believe has given risen to ugly issues.

“This time I found a negative campaign more than in the past,” says Moe Tayyaran, “but not to the extent you see in the United States.”

For 22-year-old Alex Phan, voting was important; deciding how to cast her ballot, though, was difficult.

“A lot of people talking about strategic voting,” she says, “and others saying you should vote for what you believe in.”

Over the past couple days, two million Canadians did just that.  Elections Canada said that reflected a twenty-five percent increase in the advance polls numbers from the previous federal election in 2015.

“This increase shows that more and more Canadians are taking advantage of early voting opportunities to cast their ballots,” Diane Benson with Elections Canada said in an email, “As a reminder, this is the first time advance polls are open for twelve hours each day, from 9 a.m. to 9 p.m. Those numbers were just for the first two days of advance polling, however.  They did not include Sunday and Monday, which, by all accounts, were busy as well.

Babe Tuinder is the Central Poll Supervisor at the Greenboro Community Centre polling station.  She’s worked all levels of elections for 43 years and says she’s seen it all.

“For here, we've been very steady, all four days,” she says, “It just hasn't stopped. It goes in spurts and spurts, which I think is great.”

Voter Johanna Gibson thinks it's because people are worried and want to make sure their vote counts.

For Daniel Lafrenière, that anxiety centred around the future of public service jobs.

“I think some, I won't say which one,” he said, “but some parties are more favorable to those than others so we definitely want to do our part.”

For those not interested in voting, Marc Maisonneuve had this advice.

“Everybody has a stake in it,” Maisonneuve said, “Everybody should vote.”

Voters still have until 9:00 Monday evening to vote in the advance poll.  After that, they will have to wait until Election Day.  Polls open at 9:30 in the morning and remain open until 9:30 at night.