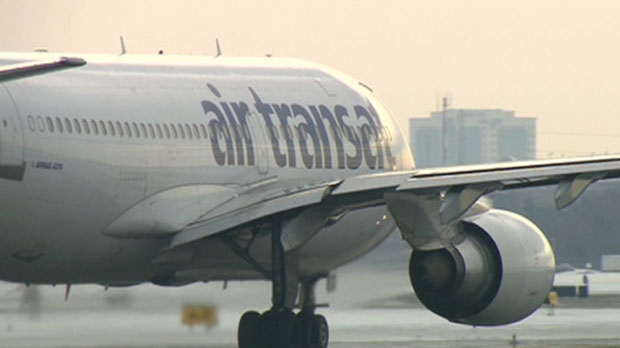 An Air Transat plane is pictured in this file photo.

OTTAWA -- Air Transat's president has taken aim at the Liberal government's proposed passenger bill of rights, writing that the legislation may unfairly punish airlines for delays that spiral out of control.

Jean-Francois Lemay made the comment in a response last week to the Canadian Transportation Agency about an incident July 31 in which two Air Transat planes sat for hours on an Ottawa tarmac.

The agency said Wednesday that it plans to hold a public hearing at the end of this month about the incident, noting in a release that broader talks about how the airline industry must respond to tarmac delays will be dealt with after Parliament approves the Liberal bill.

The Liberals plan to pass their bill, known as C-49, before the end of the year with hearings on the legislation set to begin in early September even before the House of Commons officially resumes sitting after its summer break.

Lemay's letter to the agency suggested that what went wrong in Ottawa just over a week ago shows the Liberals must force airports to "provide critical infrastructure and related operational ground support in a timely manner" if the government intends to place new obligations on airlines.

"Indeed, as we have clearly seen in this case, the tendency is to focus solely on the actions of the airline," Lemay wrote in the letter released by the agency.

"This must not be the basis for informed legislation going forward."

In a statement, Transport Minister Marc Garneau said the planned passenger rights regime would create "clear and fair standards" for how airline passengers have to be treated in cases of long delays on the tarmac, overbooking, cancellations or lost or damaged baggage.

"When passengers buy an airline ticket, they expect and deserve that the airline will respect its agreement with them," he said. "When the terms of that agreement are not met, passengers should know their rights and be entitled to compensation where appropriate.

"There should be a certain minimum standard of treatment when things do not go as planned."

Things appeared to go awry last week when storms forced two Montreal-bound two Air Transat flights, one from Rome, the other from Brussels, to land in Ottawa on July 31, along with several other flights that had to be rerouted.

Air Transat and the Ottawa airport have blamed each other for what followed, which was an hours-long wait on the tarmac, during which one passenger aboard the Brussels flight dialled 911 to get help. Lemay's letter blames the airport for failing to refuel the Brussels plane -- which would have let kept the air conditioning on -- and a deluge of rerouted flights that clogged available gates.

The flight attendants on both planes offered whatever drinks they had left to passengers stuck on the plane, Lemay wrote, but what was left after the transatlantic flights was quickly exhausted as temperatures in the cabins crept up.

Eventually, the two planes were refuelled, with the Rome flight taking off four hours after landing in Ottawa and the Brussels flight taking two more hours to leave because of problems starting the engines.

Lemay argued that during the whole ordeal, some of which played out on social media, there was no way to get passengers off the planes safely.

The agency said it will hold a hearing in Ottawa Aug. 30 and 31 after it collects written and verbal submissions from anyone directly involved, or affected by the incidents. Interested individuals or organizations can contact the inquiry officer at inquiry@otc-cta.gc.ca.

Air Transat has said it welcomes the agency's inquiry.