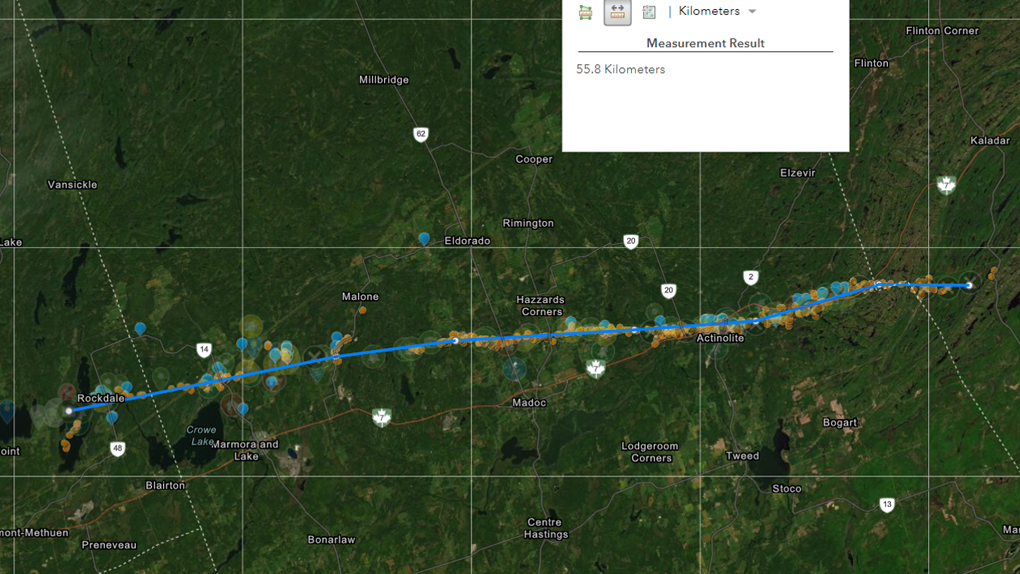 A tornado that struck an area north of Belleville, Ont. last weekend was on the ground for more than 45 minutes, covering an area of 55.8 kilometres, according to researchers.

Homes, buildings and trees in an area that included Havelock, Marmora, Madoc and Tweed were damaged by a storm that moved through eastern Ontario last Sunday. The storm hit an area east of Peterborough and north of Belleville.

On Friday, Western University's Northern Tornadoes Project released the results of its investigation into the storm.

"The damage - rated up to EF2 - was caused by one supercell tornado with a 55.8 km length and 1420 m max width," the Northern Tornadoes Project said.

The tornado was assessed at EF2 with a maximum wind speed of 190 km/h.

A map shows the tornado travelled along a track from Rockdale through Actinolite, north of Marmora, Madoc and Tweed.

"Witnesses captured video and photos of a multi-vortex supercell tornado that developed at Rockdale and tracked ENE," the Northern Tornadoes Project said.

"Extensive tree damage and widespread structural damage were reported along much of the damage path. Outbuildings were damaged and destroyed, and many houses had roof damage."

Brandon Albert told CTV News Ottawa his truck was picked up by the storm and thrown into a field across Hwy. 7 near Actinolite.

"I was definitely thrown through the air. I was probably about 80 or so feet off the road," Albert explained. "The person I know who was behind me said my truck definitely hit the power lines. I was as high as the lines."

The Municipality of Tweed has declared a state of emergency.

Radar showed a tornado debris signature from 8:11 p.m. to 8:59 p.m., according to researchers.