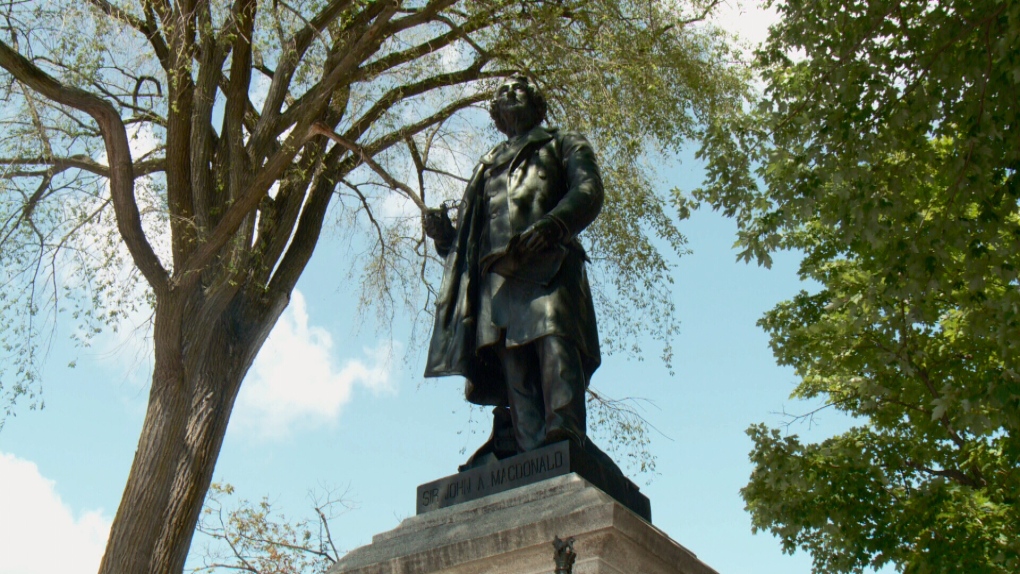 How far do we go to right a historical wrong?  That's the debate right now in Victoria as city council there votes to remove a statue of Sir John A Macdonald for his involvement with the residential school system. It's a gesture of reconciliation with First Nations.

You don't have go further than Parliament Hill in Ottawa to find a statue of Sir John A. MacDonald.  Our airport is named after him, a roadway, even a pub.

For some, it's a constant reminder of a painful period of Canada's history.

It's a popular spot on Parliament Hill to snap a photo; the statue of Sir John A. Macdonald who was the first Prime Minister of Canada and one of the founding fathers of Confederation.

But, across the country in Victoria, some say the statue is a painful reminder of colonialism and of Macdonald’s support of residential schools.

“If you’ve been in residential school,” Victoria’s Mayor Lisa Helps told reporters, “or your mother or grandmother has been in a residential school, this isn't just a statue but the person who was responsible for setting up that system.”

So council plans to remove the statue.  Back in Ottawa, tourists on the Hill say there's no rewriting history.

“I don't know,” says Vida Kazim, “I think it's still part of Canadian history so they shouldn't take it down.”

“World history changes all the time,” adds Ray Baksh, “I think we should learn from it but I don't think we need to take down the statue.”

While there's no immediate movement afoot here in Ottawa to remove a statue of Sir John A. Macdonald or to rename a roadway, there is precedent for it.  The Langevin Block on Wellington Street, across from Parliament Hill was for decades known as the Langevin Block until last summer when the Prime Minister renamed it.  Sir Hector Louis Langevin, like Macdonald, was associated with the residential school system. Prime Minister Justin Trudeau renamed it out of respect for Indigenous Peoples.

An Ottawa author and historian, however, worries there will be no end to removing statues or renaming buildings.

“The move to remove the statue reflects a poor understanding of history,” says Bob Plamondon, who tweeted out earlier today, “Removing Macdonald’s statue in Victoria is just plain wrong.”

Plamondon was a board member with the National Capital Commission and led the renaming of the Ottawa River Parkway several years ago to honor Sir John A. Macdonald.

“Sir John A, in his time and day, was moderate, progressive and sympathetic to the plight of Indigenous Peoples,” Plamondon sayd, “and he should be celebrated for that instead of criticized and made a scapegoat.”

Clearly, those within the Indigenous population see it differently.

Lynda Kitchikeesic is with Idle No More Ontario, “People always talk about, “Well, he had good intentions,” she says, “I don't care about your good intentions. Racism is racism. If you're going to be really cruel to a people, just because you think it's okay, that doesn't make it okay, not yesterday, not today and not tomorrow.”

Councillors in Victoria voted on the issue today.  There was only one dissenting vote.  The statue will now come down as early as Saturday.