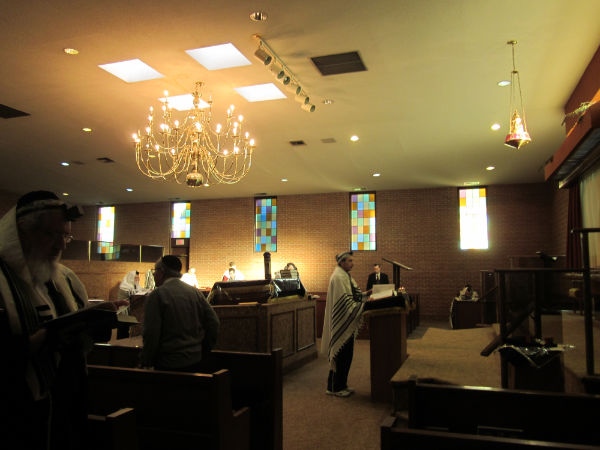 The Young Israel of Ottawa Synagogue was the target of anti-Semitic hate mail during Hanukkah. (Photo: http://www.youngisrael.ottawa.on.ca)

An Ottawa synagogue has been added to the list of Canadian Jewish congregations who have been the target of hate mail in recent days.

B’nai Brith Canada says Young Israel of Ottawa has received the same hate mail that has been seen in synagogues in Toronto, Montreal, Hamilton, Kingston, Calgary and Edmonton. The hate mail shows a bloody Star of David with a swastika in the centre, and contains the words “Jewry must perish.”

Young Israel of Ottawa describes itself as an Orthodox Synagogue. It’s located on Kirkwood Avenue, in Westboro.

President of Young Israel of Ottawa Adam Aptowitzer tells CFRA by email members were sent the following message, "You may be aware that many synagogues across the country have received an anti-semitic 'letter'.  Unfortunately, the Young Israel of Ottawa has also received this communication which arrived by mail and was opened earlier today.

The police and community authorities have been notified of the situation.

We have no reason to believe there is any imminent threat to either the synagogue building or its attendees. Nevertheless, we will be investigating measures to improve security in the building and remind everyone to remain vigilant in and around the synagogue.”

Ottawa Police spokesperson Chuck Benoit said, when he was reached Wednesday afternoon, he was “not aware of any open investigations.”

CEO of B’nai Brith Canada, Michael Mostyn, tells Newstalk 580 CFRA’s The Evan Solomon Show the letters were mailed out during the Jewish holiday of Hanukkah, which is a celebration of survival in the face of violence and genocide.

“It’s yet another Jewish holiday where there actually was a genocidal threat against the Jewish people,” he says. “There was a government at the time threatening to wipe out the Jewish population. We, of course, survived, but that’s the sick part of the messaging.”

According to B’nai Brith, there were 1,728 anti-Semitic incidents reported in Canada last year, a 26% increase over 2015. According to the latest figures Statistics Canada, Jewish Canadians were the most targeted religious group for hate crimes.

Mostyn says he did not want to speculate further on the source of the letters, citing police investigations.

“At the end of the day, we want to see consequences for this,” he says. “It’s a very high threshold to meet [for hate speech] but, when it is met, they have to throw the book at these people.”

With files from the Canadian Press.