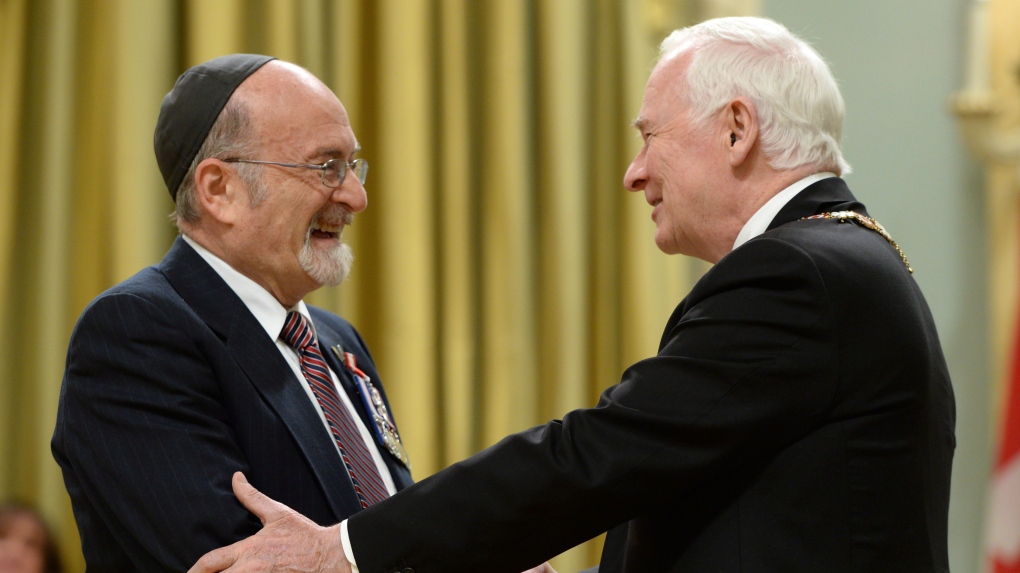 Governor General David Johnston invests Rabbi Reuven Bulka of Ottawa into the Order of Canada to during a ceremony at Rideau Hall in Ottawa on Wednesday, May 7, 2014. (Sean Kilpatrick/THE CANADIAN PRESS)

OTTAWA -- A beloved spiritual leader in Ottawa, Rabbi Reuven Bulka, has announced he has been diagnosed with cancer.

Rabbi Emeritus at Congregation Machzikei Hadas, Bulka, 76, told his congregation about his diagnosis in a letter this week, after an extended stay in the hospital.

"Without getting into unnecessary detail, they found advanced cancer in the pancreas and liver. Needless to say, it came as a shock," he wrote.

"In the face of what can be called an enormous struggle, I have decided to be with my dear family in New York. They have set into motion the steps for appropriate medical intervention, starting with the remarkable crew at the Ottawa Hospital."

Bulka said the letter was "NOT a goodbye letter" but instead a "thank you letter for all the wonderful years we shared together."

Bulka has been a Rabbi with Congregation Machzikei Hadas for more than 50 years. He is also the founder of Kind Canada, an Ottawa-based charity committed to spreading kindness, particularly through Kindness Week. He is a member of the Order of Canada, has been given the Key to the City of Ottawa, and has been involved in numerous charitable endeavors in the capital.

In 2019, the Rabbi Bulka Kindness Park was named in his honour. The park can be found on Virginia Drive, just outside his synagogue.

Ottawa Mayor Jim Watson said on Twitter on Tuesday that he spoke with Bulka to tell him the whole city is behind him.

I had the opportunity to speak with Rabbi Bulka this afternoon to tell him the whole city is behind him in his fight against cancer. Rabbi Bulka has been an incredible bridge builder and an inspiration to anyone who knows him. Please pray for the Rabbi and his family

Rabbi Idan Scher said the community would rally behind Rabbi Bulka in a letter to the congregation.

"Rabbi Bulka means so much to every single one of us and I can only imagine the sadness you are feeling at this time," he wrote. "As a community, we will rally behind Rabbi Bulka. As a Jewish community, this means increasing our prayers and our acts of goodness and kindness in honour and in the merit of our beloved Rabbi."

He said details would be shared with the congregation soon.