Ottawa residents anxious to weigh in on LeBreton Flats bids

Hundreds of people wandered through the Canadian War Museum today, anxious to get a glimpse of the two bids on the table for the redevelopment of LeBreton Flats.  Public consultations continued today on the two proposals for the right to redevelop the 9.3 hectares of land just west of downtown Ottawa. The two bidders, Devcore Canderel DLS Group, with its “LeBreton Re-Imagined” and Rendezvous LeBreton Group, with its “IllumiNATION LeBreton” had set up their presentations in separate rooms at the Museum for anxious residents to see.

For one group of folks walking into the War Museum sporting their Ottawa Senators’ jerseys, it was obvious which bid they were going to support.

“I’m here to support the Sens’ bid on LeBreton Flats today,” said Morgan Reynolds, whose group works for the Senators and bussed it en masse to the museum.

But many folks here today came in undecided but excited about the whole process.

“Either one is a major improvement to the area,” said Tom Keogh.

For Sara Holmes, carrying little 2-year-old Sadie, the focus was on family. For her, that was the Devcore bid.

“We don't currently have an aquarium or planetarium,” says Holmes, “definitely the science stuff is of interest to me because we've been lacking that in Ottawa for a while.”

Margaret and Brian Grant have seen both bids and are also siding with the Devcore group.

“When you go into the other one,” says Brian Grant, “it's more exciting. You really have a sense that they thought about what animates people.”

But Ken Cownley is impressed with both, “I think the two proposals are neck and neck right now.”

The public consultation process has been well attended.  By mid-morning at the War Museum, both rooms were packed with visitors anxious to get a glimpse of the bids.

Jean-Pierre Poulin, the President of Devcore Group isn’t surprised by the interest, “I think it’s a project of large magnitude and the response we are getting is good proof of that.”

Cyril Leeder, President of Ottawa Senators Sports and Entertainment, one of the partners backing the RendezVous LeBreton Group proposal says, “There's been a lot of genuine interest in this and it’s long overdue so people are really interesting in happens at LeBreton Flats.

Margaret and Tom Keogh have now seen both bids.  Their winner?

While many residents like James McNeil had some pointed questions about parking, for instance, he really doesn't care which one wins, as long as something happens on that site.

“I’m pretty excited about the whole thing,” says McNeil, “bring it on as fast as you can.”

While people are encouraged to comment on the two bids, this really isn't a voting contest.

The National Capital Commission says it will take the comments into consideration but will judge the two teams on the quality of their work, not the popularity of it. 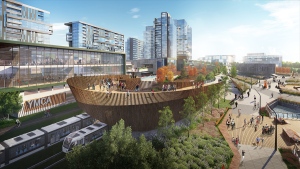 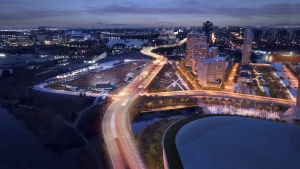