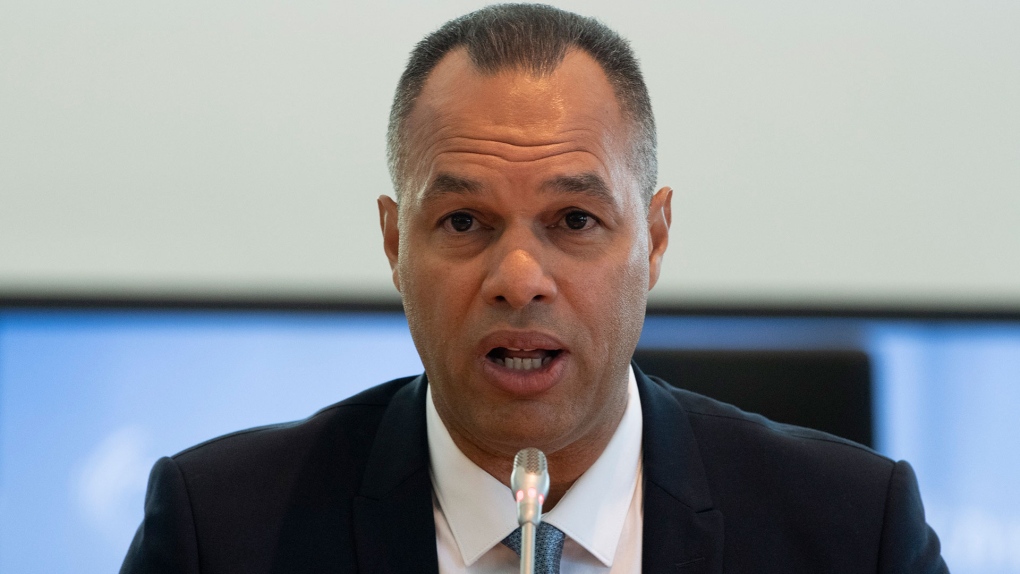 OTTAWA -- The chief of police in the nation's capital is calling for greater integration between Canada's police forces and social services, while also warning against defunding police services across the country.

Appearing before Parliament's Standing Committee on Public Safety and National Security, Ottawa police chief Peter Sloly said that, too often, front-line police officers are required to respond to issues beyond their expertise.

"It is impossible for a human being in a uniform, with a badge, a gun and, most importantly, an oath of office, with brains and a heart and arms to wrap themselves around the vast diversity of human issues that we are being asked to go to on a 24/7/365 basis," Sloly said. "We have done too much of that for too long. It has created an unimaginable amount of stress and strain on our frontline officers."

Sloly said officers suffer when they cannot save people, but also suffer when faced with accusations of not doing enough.

He suggested there could be other 911-style numbers for people to call if they are in need of a social worker or a mental health worker, but also said police officers would be available to provide support, if needed.

"So, right at the point, we can properly assess the need for the call and the right services to go, where the police will always be an option," he said. "Quite often, they will be dispatched in support of the social service worker or the mental health worker, but the immediate contact will be of the right resources and not just the police resource."

Ottawa city councillors Shawn Menard and Catherine McKenney intend to introduce a motion in late August calling on the City of Ottawa to create such mental health teams that would respond to calls "which do not involve weapons or violence, such as those involving individuals experiencing mental health crises and where a police response is not necessary," among other things.

Councillor @cmckenney and I have put in notice of motion on policing, police budgets and front line mental health response in #Ottawa. This will be considered at the next meeting of Council, currently scheduled for late August. #ottnews pic.twitter.com/RXkLiilgVQ

The motion suggests this could be done by reallocating funds from the police services budget; however, Sloly told MPs he does not agree with taking funds away from police, but rather integrating other experts into first response mechanisms.

"Our front-line officers need our support, not the defunding and the de-tasking, the integrating is what we actually need here," he said.

Sloly appeared before the committee to discuss systemic racism in policing. He said "unequivocally" in his opening statement that systemic racism exists in policing, in all Canadian institutions and in Canadian society as whole, and that it puts not only the community, but also police officers in harm's way.

Sloly said removing the burden of being the first point of contact for nearly all problems in society from front-line officers would help address systemic racism, among other issues.

"The community and police do not want to be the only or even primary response option to every call for service, everywhere, on a 24/7/365 basis," Sloly said. "This model does not fully serve the community's needs and it puts police officers in the untenable position where they do not, and cannot, have the knowledge, skills, and abilities to consistently and successfully deal with non-police related calls, most notably with people suffering from mental health or addictions."

Sloly said addressing these concerns might also address the concerns of Indigenous, Black, and racialized communities who he says "sometimes feel they are over-policed, under-served, and over-represented in the criminal justice system."

Calls to defund or dismantle police services in Canada and the U.S. have been increasing since the death of George Floyd in Minneapolis, Minn. two months ago. In Canada, there have been increasing calls to end the practice of police officers responding to mental health calls after Rodney Levi and Chantel Moore were killed by RCMP in New Brunswick, and Ejaz Choudry, of Mississauga, Ont. and D'Andre Campbell of Brampton, Ont. were killed by Peel police. Family members of Regis Korchinski-Paquet are also questioning the involvement of Toronto police officers in the 29-year-old woman's fall from a balcony during a mental health call.

Sloly's statement also came on the fourth anniversary of the death of Abdirahman Abdi in Ottawa, a Black man with mental health issues who died following a violent arrest at the hands of Ottawa police in 2016, after officers responded to a reported sexual assault at an Ottawa coffee shop. Closing arguments in the trial of Ottawa police Const. Daniel Montsion, who has pleaded not guilty to charges of manslaughter, aggravated assault, and assault with a weapon in connection with Abdi's death, ended on Wednesday. A verdict is expected in October.

In June, Toronto's Centre for Addiction and Mental Health called for an alternative to police in responding to mental health calls.