The Ottawa Police Services Board will reconvene at 3 p.m. Tuesday to discuss the 2022 budget. The board heard from dozens of delegations over the course of more than four hours Monday.

Fifty-five people were signed up to speak at the meeting. While some were not available, the board listened to hours of members of the public and community groups urging them to reject a planned $14 million budget increase in 2022.

Just before 9 p.m. Monday, the board decided to recess until Tuesday to continue the meeting.

While the meeting was going on, a group of demonstrators blocked an on-ramp to Highway 417, calling for a freeze of the Ottawa police budget.

The Ottawa Black Diaspora Coalition set up at the eastbound on-ramp at Metcalfe near Isabella Street.

The coalition issued a list of 10 demands to both the Ottawa Police Services Board and the City of Ottawa:

Police officers were called to the area to help direct traffic. In a video posted to the coalition's Instagram page, drivers can be seen angrily yelling at the small group of demonstrators, who delivered their demands via megaphone.

Protesters left the area around midnight, but are planning to reconvene at 2 p.m. Tuesday at the Human Rights Monument on Elgin Street. 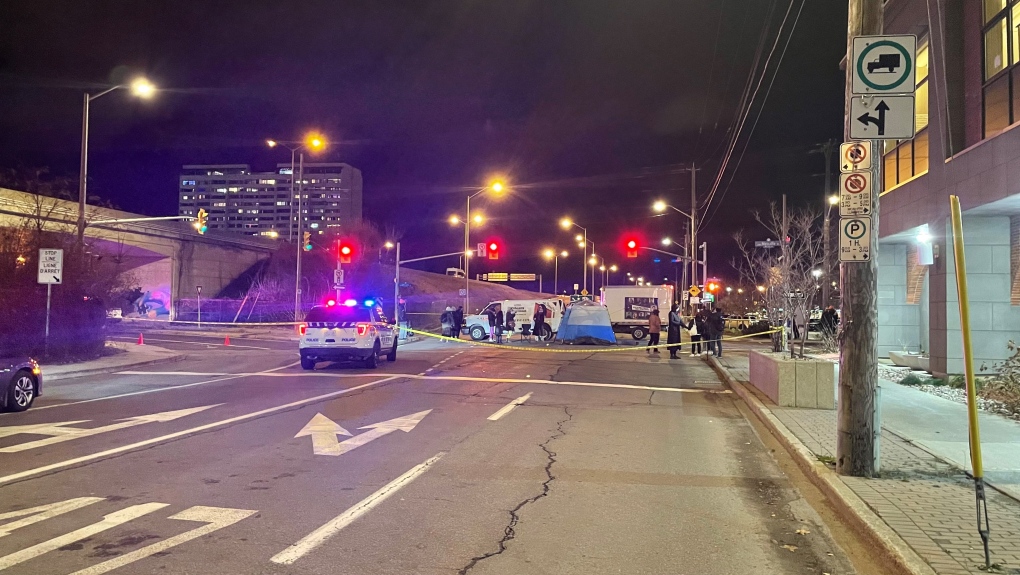 The Ottawa police $346.5 million draft budget tabled last month calls for $14 million in new funding next year, which would add $19 to the average property tax bill.

Robin Browne, co-lead of 613-819 Black Hub, tells CTV News Ottawa the main message for the board is to "have the courage" to freeze the police budget at 2021 levels.

"It really does take courage to make the right decision in the face of opposition from people who are really invested in what you're trying to take away," said Browne, noting there have been calls from the community to freeze or reduce police spending.

"My final message is for the board to listen to the public and have the courage to do the right thing."

Browne says freezing the 2022 police budget would "start the process of moving a big chunk of that money into services that actually do keep people safer; like mental health response, housing and that kind of thing."

The Ottawa Police Services Board directed staff to develop the 2022 budget with a zero-per-cent increase as its base, with detailed explanations for any increase in spending. Last November, the board approved a motion after finalizing the 2021 budget to direct staff to set up a working group to see how the 2022 budget could be reduced or frozen at 2021 levels.

"We’re putting resources into traffic safety - number one issue in every neighbourhood in every ward across the city, every councillor wants that," said Sloly.

"We’re trying to provide funding into our most vulnerable sectors; women, partner assault, domestic abuse, and we know that guns and gangs is an ongoing problem in major cities across the country and right here in the nation’s capital.

The budget includes $5.1 million in efficiency savings, and foregoes plans to hire 30 new officers next year. There is also $400,000 for police to "develop and implement an alternative call referral program for low-risk, low-acuity 911 calls or calls to police" for low-risk mental health and addiction concerns, according to the draft document.

Browne, who is one of 28 delegates registered to speak to the Ottawa Police Services Board, says the board needs to end the "vicious cycle" of giving police money in the budget each year.

Browne notes the 613-819 Black Hub 'Our Fair Share campaign' found statistics available on the Ottawa police website show crime rates have gone up in most wards even as police funding increases.

Ottawa Police Services Board Chair Diane Deans called the proposed 2.9 per cent increase in the 2022 budget a starting point, adding, "It will now be up to the board to refine those numbers in keeping with community expectations."

If approved by the Ottawa Police Services Board, the 2022 Ottawa police budget will be presented to council for final approval on Dec. 8.

The 2021 Ottawa police budget included a $13 million increase in funding.