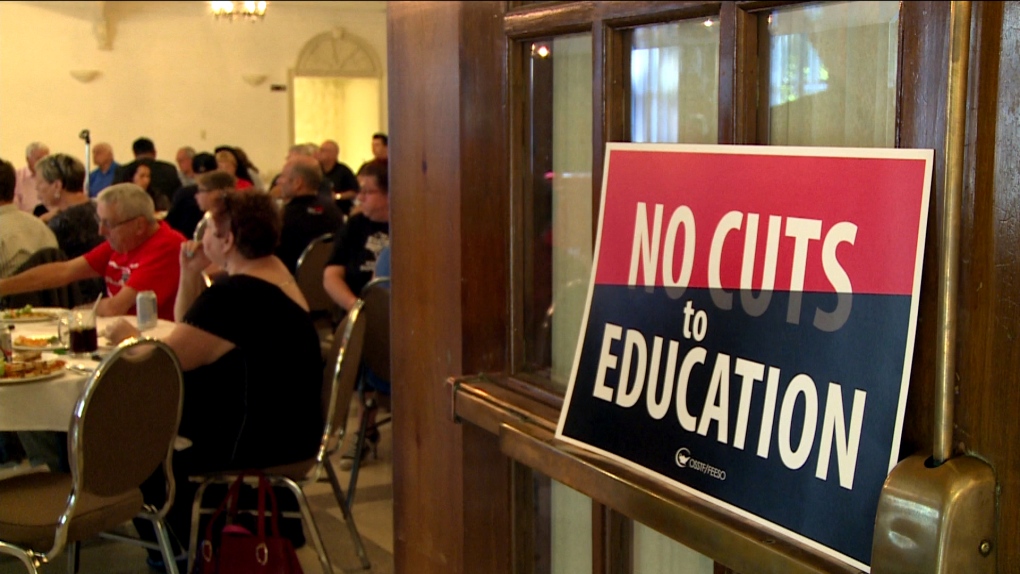 TORONTO -- Ontario's public high school teachers plan to walk off the job for a day on Wednesday in a bid to turn up the pressure during tense labour negotiations with the provincial government.

Harvey Bischof, president of the Ontario Secondary School Teachers' Federation, announced Thursday that the one-day strike set for Dec. 4 will only be called if significant progress isn't made at the bargaining table before that date.

Bischof said the government is still trying to impose mandatory e-learning, larger class sizes and other measures that would degrade the quality of education in the province.

"The erosion of education is happening now," he said. "We can't wait any longer for this to continue. We have been driven to this action."

"Strikes hurt kids," he said. "For teacher unions to leave the table, to turn their back on our children, and to escalate to the point of compromising their education, is deeply troubling for parents and our government."

The union said they did not leave the table, and Lecce later said additional bargaining dates have been offered, but haven't yet been accepted.

The main issue is compensation, Lecce said. The government recently passed legislation capping wage increases for all public sector workers at one per cent for three years, but the union is asking for inflationary increases, which would amount to about two per cent.

If that increase is applied across all teachers, it would amount to $1.5 billion, Lecce said.

"Educators in Ontario are the second-highest remunerated in the country," he said. "We pay them well and we value their work. But they're asking for a $1.5-billion increase and we're offering a $750-million increase."

Premier Doug Ford said he has confidence that Lecce can reach a deal with the teachers.

"We're doing everything we can to strike a deal and I think we've shown good faith," the premier said.

Public high school and elementary teachers started an administrative work-to-rule campaign on Tuesday that includes not putting comments on report cards, not participating in standardized testing and not attending certain meetings.

Ontario's four major teachers' unions, which have been trying to ink new labour deals since previous contracts expired on Aug. 31., have all expressed frustration with what they say has been a lack of progress at the bargaining table.

The Catholic teachers' union has talks scheduled Friday involving a conciliator, while French teachers will hold strike votes next month.

High school teachers say their main issues at the table include larger class sizes and new mandatory online learning classes. The government has partially walked back both contentious proposals, but Bischof has said that will just leave the education system "somewhat worse" instead of "much worse."

The government announced in the spring that it was increasing average high school class sizes from 22 to 28 over four years and requiring four online credits to graduate. In recent weeks, it has offered a class-size increase to 25 instead, and dropped the e-learning requirement to two courses.

But the teachers don't want any mandatory online courses or any class size increases. They note that the government's offer of increasing class sizes to the lower target of 25 would also mean local class size limits are removed, essentially allowing the province to see the number of students per class climb indefinitely.

-- With files from Nicole Thompson

This report by The Canadian Press was first published Nov. 28, 2019.