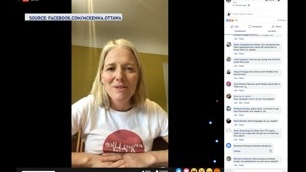 OTTAWA -- Self-isolation at home during the COVID-19 pandemic has parents looking for ways to entertain and teach kids, while at the same time connecting with the outside world.

Parents and teachers at the Wakefield Elementary School in West Quebec are using an online video chat to host morning announcements.   Students and parents sign on early in the morning to hear the school news of the day.

Wednesday morning, Grade 3 student Juliette Gorka hosted the announcements for everyone to see, “It is day three, week two of being in isolation; even though it feels like 5,000 days.”

Elizabeth Logue began the project, “It was an idea come to life, one of those that came out of necessity.”

Logue says that with the school kids being in isolation, “it was a feeling of needing to reconnect.”

Vicki Kelly and her son Callum have been joining in, “I think it’s a lot of fun; it keeps the kids connected.  They get to see each other on the screen.  Our first howl yesterday was done by the principle from her backyard in her pyjamas.   That was really cool and the kids thought it was really funny.”

McKenna answered questions from children during the session, including “Are kids allowed in Parliament?  Of course, come visit!“

The cabinet minister even showed a replica of the gavel used during talks at the Paris Accord,  “This was the gavel, so when we got the Paris agreement, this isn’t the actual one - they gavelled it down - boom - on a l’accord de Paris.”