New traffic-calming signs go right to the centre of the problem. 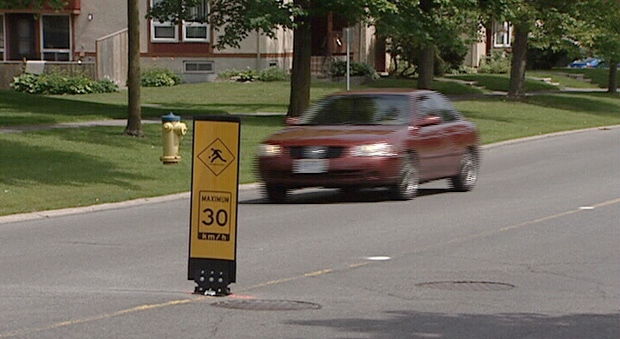 Ottawa is installing signs right in the middle of the road to slow down speeding drivers.

The City of Ottawa is trying something new in its ongoing battle with drivers who speed through residential areas. And it might come as a bit of a surprise.

It’s installing warning signs right in the middle of the road.

The signs are 1.2 metre high by 32.4 centimetres wide. They are flexible and are mounted on a spring base so they can run over by wider vehicles, or inattentive drivers.

It’s part of a 10 thousand dollar traffic-calming pilot project that runs from now to November. The signs are being installed near schools, parks and seniors’ homes on 12 problem streets in the city.

"It's another measure on the road. It's another visual cue for drivers to pick up. It's in the road as opposed to on the side of the road," says Doug Kent, the City’s Manager of Traffic Safety and Mobility.

The signs warn drivers to slow to 30 kilometres per hour through the designated zone. But the street’s posted speed limit still applies. "They are a warning, a cautionary awareness speed, that you're in an area that's more sensitive. And this is an advisory speed to drive at," says Kent.

The signs are already in use in Montreal where they have resulted in some success. Ottawa will take its signs down in the fall to allow for snow-clearing. Then the city will assess their effectiveness. If the signs work they could pop up on more streets next spring.