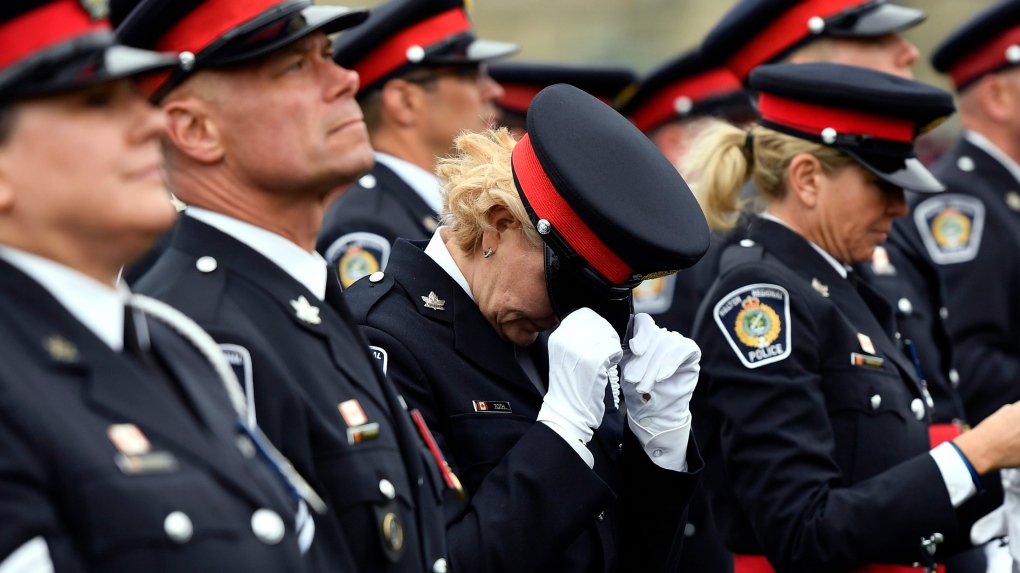 A police officer adjusts her hat before the Canadian Police and Peace Officers Memorial Service on Parliament Hill in Ottawa on Sunday, Sept. 30, 2018. THE CANADIAN PRESS/Justin Tang

OTTAWA -- An annual memorial service for Canadian police officers who die in the line of duty will take place virtually this September, amid the COVID-19 pandemic.

In a letter on the National Police and Peace Officers' Memorial website, memorial coordinator S/Sgt. Steve Boucher said they made the difficult decision to not hold the annual ceremony on Parliament Hill in person this year.

"While Ontario has moved into Phase 3 of the province’s re-opening plan, we do not believe we can safely hold a large-scale event under the circumstances of the ongoing COVID-19 pandemic," Boucher said.

Boucher says the virtual ceremony will be similar to the in-person event.

"The morning will start with a solemn reading of the names of officers who have made the ultimate sacrifice, and will include the same familiar elements of previous services," he said. "The service itself will take place in the Summer Pavilion adjacent the tablets overlooking the bluff onto the Ottawa River. The area is quite small and will only accommodate the small number of people essential to run the service."

There is also the matter of the ongoing construction on the Hill.

Two officers were to be honoured at this year's ceremony: Const. Allan Poapst, an RCMP officer who died in a crash on Manitoba's Perimeter Highway in December, and Const. Heidi Stevenson, an RCMP officer from Nova Scotia who was killed in a confrontation with the Portapique mass shooter, Gabriel Wortman, this past April.

"I should note that we have consulted with the families of the two officers who were to be honoured this year, and they have indicated their strong preference to avoid travel to Ottawa this year, and will instead join us in 2021, when we will, hopefully, be back to normal operations," Boucher said. "However, both of their sacrifices will be acknowledged during the service this year."

The event takes place Sept. 27. Details about how to access the livestream will be made available closer to the ceremony.