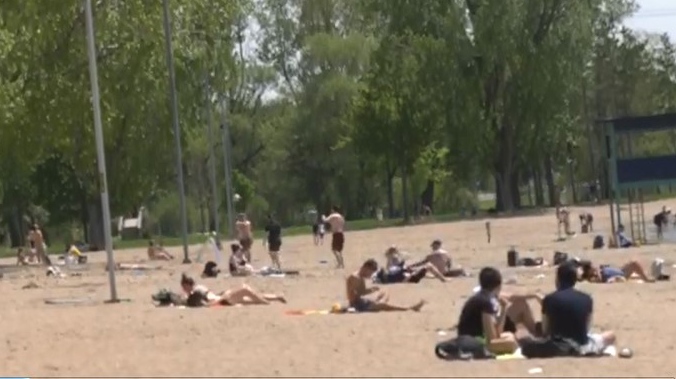 OTTAWA -- Ottawa residents flocked to the beach to cool off on one of the warmest days of the year.

And it appeared beachgoers were respecting calls for physical distancing while CTV News Ottawa cameras were at Mooney’s Bay.

At Mooney’s Bay, hundreds of people were enjoying the warm weather in the sand and the water.

“I am glad everyone is spread out in their own little group,” said Emily on Sunday afternoon.

“I am glad Ottawa is taking it more seriously.”

Gatineau Police stepped up patrols at the Aylmer Marina on Sunday after photos showed hundreds of people at the beach on Saturday.

When CTV News Ottawa crews were at Mooney’s Bay, it appeared everyone was staying in small groups and two metres apart.

Ottawa’s beaches are open, but play equipment and outdoor exercise equipment remain closed to the public.

Users are encouraged to practice physical distancing and do not gather in groups of more than five people who do not live in your household.

Enclosed dog parks are now open, provided you practice physical distancing and do not gather in groups of more than 5 people who do not live in your household.

Please remember – it is the owner’s responsibility to control their dog and pick up after them. #OttCity pic.twitter.com/fsW3Vs3xAz

Lifegaurds are not on duty at Ottawa's three public beaches during the spring - Mooney's Bay, Westboro and Petrie Island. Britannia Beach is scheduled to be closed this year for construction work.

An Ottawa Bylaw officer was in the parking lot of Mooney’s Bay when a CTV News Ottawa crew arrived at the beach.